By Lestey Gist at The Gist of Freedom 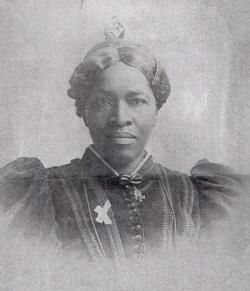 At the end of the nineteenth century, Amanda Smith, established the first orphanage in Chicago Illinois for African American children.

At the time of her death in 1915, the Chicago Defender called the well-traveled Amanda Berry Smith, “The greatest woman that this race has ever given to the world.”

For 50 years following the Civil War, she followed paths which led her to prominence as a black woman in a society dominated by white males. She gained visibility in the Women’s Christian Temperance Union and was closely connected to the work of the Colored Women’s Clubs. These clubs were a major element in the African American expression of the Progressive Movement of the late nineteenth and early twentieth centuries.

Amanda Smith was born in slavery in January 1837, the oldest of 13 children. Although she had only a few months of formal education, she was a compelling speaker and singer; wherever she traveled, people responded to her engaging personality and spiritual power.

Amanda Smith died on February 24, 1915. On March 1, 1915, one of the largest funerals in the history of the Chicago African American community honored her memory.

Read more of the original post on The Gist of Freedom