John L. Whitehead, Jr., decided to join the United States Army Air Corps at the age of 19. He was assigned to Tuskegee Army Air Field at Tuskegee Institute in Alabama. While a Tuskegee Airman, Whitehead became known as “Mr. Death.”

Whitehead attended West Virginia State College before entering the United States Army Air Corps. At Tuskegee he excelled at learning to fly and received his pilot’s wings on Sept. 8, 1944 and was commissioned a second lieutenant. He was also now known as one of the Tuskegee Airmen who were part of the Tuskegee Experiment.

He joined the 301st Fighter Squadron, 332nd Fighter Group in March 1945 and flew 19 missions, returning to the United States in the Fall. He was first assigned to Tuskegee Army Air Field, he was transferred to Lockbourne Army Air Base and separated from the service in January 1947. He then attended West Virginia State, where he received a B.S. in Industrial Engineering. Later called back to active duty in August 1948, he was assigned to the 100th FS, 332nd FG at Lockbourne.

During WWII the 332nd Fighter Group destroyed 112 Nazi airplanes in the air, 150 Nazi airplanes on the ground, as well as 950 railcars, trucks, and other motor vehicles destroyed. Sixty-six (66) of their pilots were killed in action or in accidents. Thirty-two (32) of their pilots were downed and captured – POWs. Approximately 1000 Fighter Pilots were graduated from Tuskegee University during World War II. John L. Whitehead completed his WWII service at the rank of Captain. 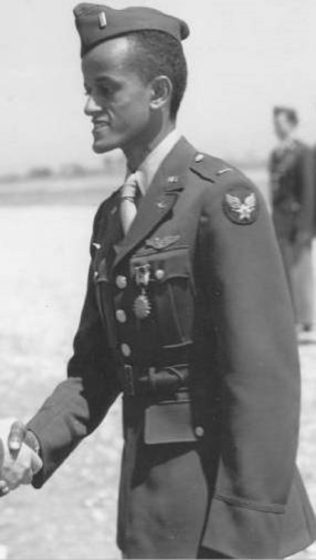