“The moment the slave resolves that he will no longer be a slave, his fetters fall. Freedom and slavery are mental states”

Emancipation from slavery for the four million African Americans enslaved before the civil war came in different forms. For many, it was in 1865 when Robert E. Lee, the Commander of the Confederate Army, surrendered his troops to the federal forces. For some, it came in 1861 when the Union forces captured Confederate areas like South Carolina. Other slaves emancipated themselves by running away via the Underground Railroad. In 1865, the Emancipation Proclamation made by President Abraham Lincoln liberated all slaves living in areas captured by Confederate forces.

During this time, Texas was separated from both the Confederacy and the Union. Many slave owners had migrated to Texas in order to avoid the Union’s reach, and they did everything in their power to ensure that the slaves did not know of the emancipation, as there were about 250,000 slaves in Texas. However, this changed when federal troops arrived in Texas on June 19, 1865, the slaves knew of the emancipation.

“The people of Texas are informed that, in accordance with a proclamation from the Executive of the United States, all slaves are free. This involves an absolute equality of personal rights and rights of property between former masters and slaves, and the connection heretofore existing between them becomes that between employer and hired labor. The freedmen are advised to remain quietly at their present homes and work for wages. They are informed that they will not be allowed to collect at military posts and that they will not be supported in idleness either there or elsewhere.”

The news spread through Texas, and the now-freed African Americans choose June 19 as their day of celebrating emancipation, which is now known as “Juneteenth.” The following year, in 1866, they held celebrations in form of barbeques and parades in order to celebrate their freedom from slavery. 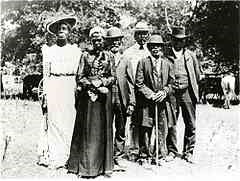 Although emancipated, segregation was still rampant. Black people were banned from using some public parks and they had to pool their funds in order to purchase land where they would hold celebrations. In the 20th Century, economic and political forces like the Jim Crow laws and the Great Depression ensured hard living conditions for the African Americans. They were regarded as second-class citizens, and those who moved to the urban centers to look for work barely took a day off. This led to the decline of the Juneteenth celebrations during this era.

During the 1940s and 1970s, many African Americans migrated from Texas and took the practice of celebrating Juneteenth with them whenever they settled. In the 1980s and 90s, Juneteenth was widely celebrated by the African American communities. In 1980, Texas became the first state to establish Juneteenth as a state holiday.

As of today, 43 states in the United States observe Juneteenth. The states that do not recognize it are: Arizona, Hawaii, Montana, New Hampshire, North Dakota, South Dakota and Utah.

In the words of Al Edwards: