Reri Grist was a classical vocalist and educator. She performed her first staged, operatic role in 1956 as Cindy Lou in Carmen Jones. 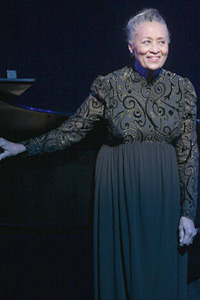 Grist was born on February 29, 1932, and grew up in the East River Housing Projects in Spanish Harlem. She attended the high school of Music and Art and graduated with a Bachelor of Arts in Music from Queens College in New York City.

By her early teens, Grist appeared on Broadway in small roles and in musicals along with Ossie Davis, Ruby Dee, Eartha Kitt, and Helen Hayes.

Her first opera engagement was in NYC’s Washington Square Park in 1959, as Madame Herz in an open-air concert performance of Mozart’s “Der Schauspieldirektor.” Grist debuted at the Metropolitan Opera on February 25, 1966, as Rosina in Rossini’s “Il Barbiere di Siviglia.” Other roles, which she sang there over twelve years, included Gilda in “Rigoletto,” Norina in “Don Pasquale,” Olympia in “Les Contes d’Hoffmann,” and several others.

Grist ended her operatic career in 1991. She performed at the De Nederlanse Oper Amsterdam in the one-woman tour de force, “Neither,” by Morton Feldman/Samuel Beckett, directed by Pierre Audi.

As a professor of voice, Grist has taught at the School of Music in Bloomington, Indiana, and at the Hochschule für Musik und Theater München. She has also been a member of various international juries, and has given Master Classes at Young Artists Programs, including those of the Santa Fe Opera Apprentice Program, Metropolitan Opera Lindemann Young Artist Development Program, and the San Francisco Opera Merola Program.