Lelia I. Francis: First Black Realtor in the State of Ohio and Second in the Nation

Lelia I. Francis ran against C. J. McLin Jr. for the 88th district of the Ohio State house of Representative. Francis tried to get McLin to debate her. When all else failed she went to his office with a hammer ‘to nail his voting record to his door.’ McLin came outside for a sidewalk debate.

Francis was born in Salt Lick, Kentucky. Lelia I. Francis was a graduate of Kentucky State University and taught in rural schools in Kentucky before moving to Ohio.

Francis and her husband, Charles, moved to Dayton in 1943. Four years later, she became the first black realtor in the state of Ohio and second in the nation. She was a real estate broker for more than 50 years. She also helped establish the Unity Bank and an African American mortgage company.

In 1967, she was arrested in a demonstration to get the Rike-Kumler Department Store in downtown Dayton to hire blacks. She also ran against C.J. McLin Jr. for the 88th district of the Ohio State House of Representatives. 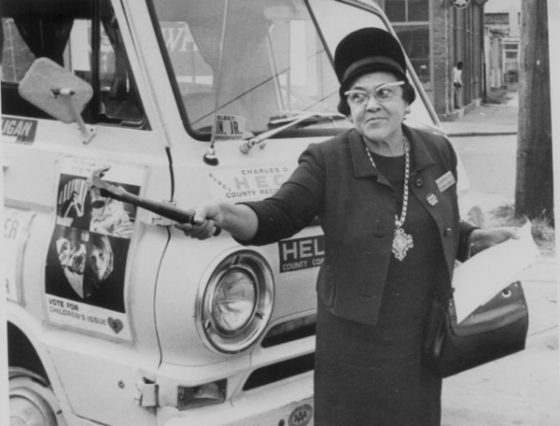 Lelia I. Francis
« Previous PostPoem: "The Heart of a Woman" by Poet Georgia D. Johnson Next Post »October 2: Thurgood Marshall Was Sworn in as the First Black Supreme Court Justice Today in 1967