Leon H. Sullivan was a famed civil rights leader who also served as the first black board member of General Motors. He encouraged GM and other corporations to use their economic influence to end apartheid.

Sullivan was born in Charleston on October 16, 1922. He was raised in a small house in a dirt alley in one of Charleston’s poorest sections. Sullivan has often re-told the event which set a course for the remainder of his life. At the age of twelve, he tried to purchase a Coca-Cola in a drugstore on Capitol Street. The proprietor refused to sell him the drink, saying, “Stand on your feet, boy. You can’t sit here.” This incident inspired Sullivan’s lifetime pursuit of fighting racial prejudice.

Sullivan attended Charleston’s Garnet High School for blacks and received a basketball and football scholarship to West Virginia State College in 1939. A foot injury ended his athletic career and forced Sullivan to pay for college by working in a steel mill.
Sullivan took his first active role in the civil rights movement by helping to organize a march on Washington, D.C. in the early 1940s. He relocated to Philadelphia where he took over Zion Baptist Church as minister in 1950.

Sullivan believed jobs were the key to improving African-American lives and asked that the city’s largest companies interview young blacks. Only two companies responded positively so Sullivan organized a boycott of various businesses. The boycott was extremely effective since blacks constituted about 20 percent of Philadelphia’s population. His work was recognized by Dr. King who asked him to help organize boycotts in Atlanta in the 1960s.
Sullivan realized one of the key employment problems for blacks was a lack of training for the changing job market. African Americans had been excluded from the types of training which led to better paying jobs. He formed the Opportunities Industrialization Center (OIC) to train and instill pride in African Americans.

During the early 1970s, Sullivan turned his attention to ending the system of apartheid in South Africa. In 1985, Sullivan demanded that South African blacks be given the right to vote within two years. When South African leaders failed to meet the deadline, Sullivan called for a multinational boycott. Companies from around the world pulled their businesses out and devastated the South African economy. Leon H. Sullivan died April 24, 2001. 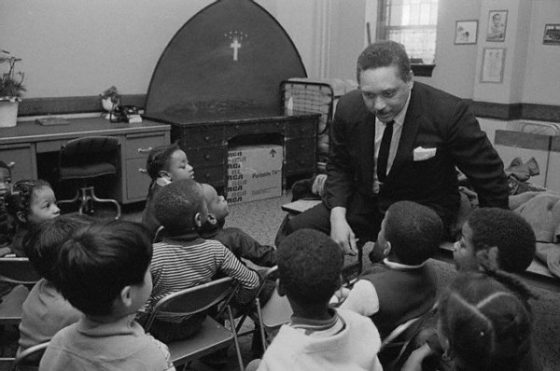 18 Jan 1971, Philadelphia, Pennsylvania, USA — Philadelphia: Talks With Children. The Rev. Leon Sullivan, first Black man to become director of General Motors, talks to a group of preschool children who use his church as their kindergarten. Image by © Bettmann/CORBIS