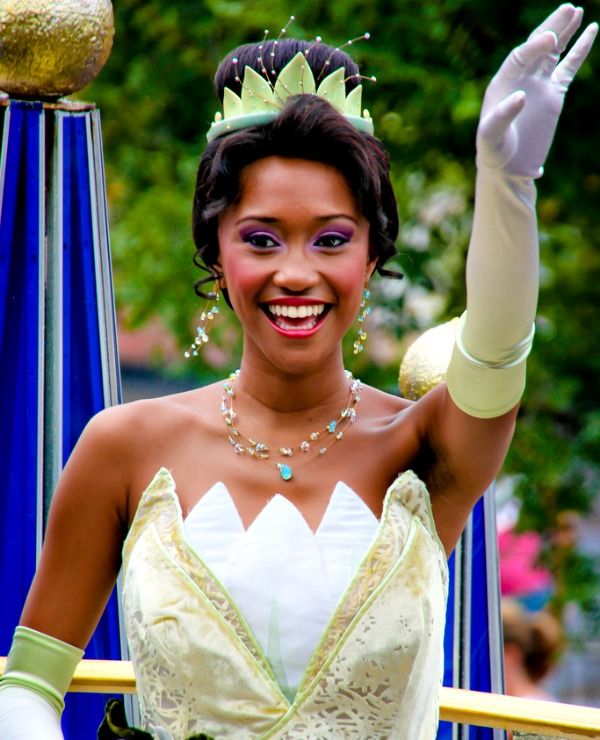 Princess Tiana posing for a photo at one of the Disney parks.

Every young girl fantasizes of meeting her Prince Charming.  We dream of the Cinderalla fairy tale, elegant balls, and happily ever after. The question arises of whether there exists black royalty today other than Disney’s Princess Tiana. Well, the following women prove that the concept transcends cartoon fantasy and has expanded beyond the shores of Africa. Princess Angela of Liechtenstein is the wife of Prince Maximilian of Liechtenstein. She is the first person of known African origin to marry a member of a reigning European dynasty.  The marriage was groundbreaking,because it allowed a person of Afro-American ancestry into one of the few still reigning families in Europe by a marriage. The couple’s son, Prince Alfons is  the next in line to the Liechtensteiner throne. Baroness Cécile de Massy is the wife of Christian Louis, Baron de Massy, the only nephew of the late Prince Rainier of Monaco.  As the baroness, she is the highest ranked black person in Monaco. She and her husband have two sons together, Brice Souleyman Gelabale-de Massyand Antoine de Massy. Her Royal Highness Princess Sikhanyiso Dlamini of Swaziland is the oldest daughter of  King Mswati III.  The very smart and well educated young lady, affectionately known as Princess Pashu, has studied at several different schools around the world. First, she went to school in Britain at St. Edmund’s College, and after that she went to The United States to study drama at Biola University in California. She recently graduated with her Masters in digital communication from Sydney University in Australia. A native of Inglewood, Calif., Keisha is an accomplished model having worked with L’Oreal, Maybeline, Revlon and Cover Girl. She is also most recognized for being the first African-American woman to be featured in three consecutive commercials as “The Pantene Girl.” Princess Keisha heads Wonderful TV with her husband, Prince Kunle Omilan. Along with running Wonderful TV, which boasts a network of stations across Europe, Princess Keisha has modeled for nearly every cosmetics brand from L’Oreal to Cover Girl, and has appeared in “Zoolander,” “30 Rock,” and “Saturday Night Live.” Although she isn’t a princess,Countess Mary, born in Wau, Sudan, is married to Ferdinand Leopold Joseph Count von Habsburg of Austria. Ferdinand hails from the venerable Von Habsburg royal family, who are descendants of William the Conqueror. Countess Mary and Count Ferdinand exchanged vows in 1999 in Nairobi, Kenya and the couple has three children together. Although some in the royal family took issue with their coupling because the Countess was an African commoner, Dr. Otto von Habsburg, head of the family, declared her an “equal.”