Looking Black On Today in 1989, Colgate Changes the packaging for its “Darkie” tooth paste

The Colgate-Palmolive Company changed the packaging for its ‘Darkie’ tooth paste sold in Asia on January 28, 1989. This was a long time coming, but is not a big surprise considering how marketing works in different countries. Even in the modern era there is rampant racism overseas, but truthfully it is more bigotry than racism. Blackface in America is widely known to be an offensive thing, but overseas it is a different story and it isn’t uncommon to see blackface in everyday TV and media. But what makes this particularly bad is that Colgate-Palmolive is an American company with headquarters in New York.

The Darkie toothpaste in Asia had a blackface performer as the logo, right down to the sambo-like image. Like all things big company related, the actual toothpaste wasn’t manufactured directly through Colgate but through one of its offshore subsidiaries in Shanghai named Hawley & Hazel Chemical Company. The logo was a creation of the then CEO of the company that was intrigued when he saw blackface performer Al Jolson. To be fair to Colgate, this was in production before they bought out Hawley & Hazel, but even after the buyout they didn’t opt to change the product. 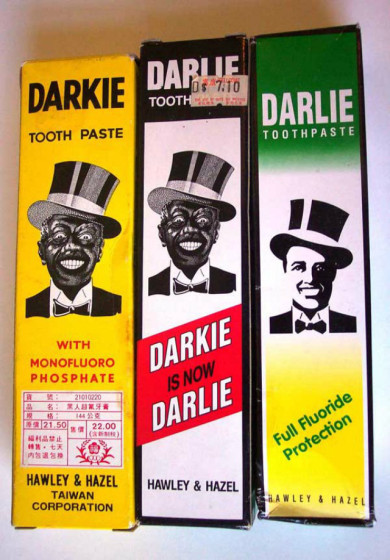 This wasn’t a situation of a few African American groups and other leaders complaining- Colgate shareholders were raising a stink about the product and wanted it banned. Chief Executive of Colgate Reuben Mark gave a passionate statement about preserving the image of the company and vowed to change it. In his statement he used buzzwords like ‘it’s just plain wrong’ and ‘it’s just offensive’. He basically said all of the correct things a head of an organization is supposed to say, and within his outrage of the product he snuck this little gem in;

“What we have to do is find a way to change that is least damaging to the economic interests of our partners.”

So the solution? They changed the name from Darkie to Darlie and changed the sambo looking character to a black silhouette in a top hat. The problem is that in Chinese the word Darlie means ‘black person’. To say that Colgate-Palmolive had a chance to make a difference and dropped the ball would be an understatement, but this serves as a good lesson to African Americans worldwide. Be careful who you put your support behind, even if you think they have the best intentions. There is always an African American alternative business that could use support, especially while they are being suffocated by big conglomerates like Colgate-Palmolive.

AsiaBlackfaceColgateDarkieSamboToothpaste
« Previous PostLooking Black On Today in 1958, Anita Baker Was Born Next Post »Today In Black History On January 27th