The Miami Riot of 1980 was the first major race riot since the late 1960s. In December 1979, a number of white Miami-Dade, Florida, police officers were involved in a high-speed chase involving black motorist Arthur McDuffie.

Police reported that the chase ended when McDuffie crashed his motorcycle, which ultimately led to his death. However, coroner reports suggested that the cause of death was not consistent with a motorcycle crash. Later, a responding officer following the chase testified that there was no crash, and that the police officers had beaten McDuffie to death with their flashlights.

Arthur McDuffie was a 33-year-old man who was riding his black and orange 1973 Kawasaki motorcycle during the early morning on December 17, 1979. He had accumulated traffic citations and was riding with a suspended license. He led police on an eight-minute-long high-speed chase through residential streets before being caught by officers.

McDuffie was beaten so badly, prosecutors at the trial used the words that his skull had been cracked “like an egg.” McDuffie died four days later as a result of his injuries.

Four police officers were indicted for manslaughter, as well as tampering with physical evidence and fabricating.  Acting director of the Dade County Public Safety Department, Bobby Jones, suspended the officers on December 27. He reported that since 1973, the four had been cited in 47 citizen complaints and 13 internal affairs probes. Two other officers, Herbert Evans, Jr., and Ubaldo Del Toro, were charged with being accessories to the crime, as well as fabricating evidence. The six officers were also fired. 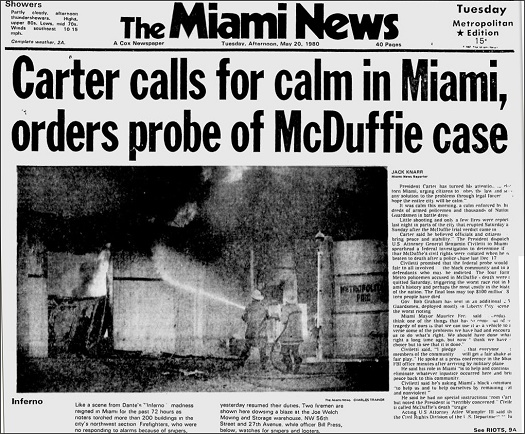 On April 25, officer Mark Meier was given immunity. He testified that the high-speed chase had slowed to 25 miles per hour when McDuffie shouted, “I give up.” Meier said that between three and eight officers surrounded McDuffie, pulled off his helmet, and beat him with nightsticks. Del Toro was acquitted of his charges.

Judge Nesbitt announced that the state had failed to prove its case. Nine days later, a jury acquitted the remaining officers on all 13 counts of the indictment after less than three hours of deliberation.

The verdict resulted in protests in the Miami streets; approximately 5,000 people attended a protest at the Downtown Miami Metro Justice Building. By 6:00 p.m., the protest had turned into a riot; three people were killed and at least 23 injured, with several of those in critical condition. By the end of the riot, 18 men and women died, eight of whom were white, and 350 people were injured, including children.

On November 17, 1981, Dade County commissioners agreed to a $1.1 million settlement with McDuffie’s family in exchange for their dropping a $25 million civil lawsuit against the county. Of that amount, the family’s legal team received $483,833, McDuffie’s two children each received $202,500, and his mother was awarded $67,500.