On November 10, 1891, the U.S. Patent Office issued Patent #463,020 to Granville T. Woods for his electric railway system. It was just one of the 60 patents that was issued over the course of his career as an inventor. Born to free African-Americans in 1856, Woods was became known as “#Black Edison.” Woods invented 15 new technologies for electric railways, including the troller, a grooved wheel that allowed streetcars (later known as trolley cards) to pick up power from overhead lines. He also invented the “third rail” power pickup currently used by many electric transit systems.  Woods was successful in selling many of his inventions to General Electric, Westinghouse and Bell Telephone. 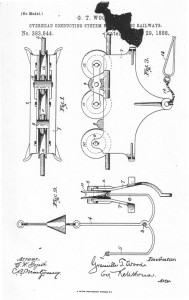 One of his most notable inventions was the induction telegraph system which enabled moving trains to exchange messages, helping engineers avoid collisions and warn of hazards on the tracks. Woods defeated Thomas Edison’s lawsuit challenging his patent, and later turned down Edison’s offer to make him a partner.