Olga The Negress: Sold To The Circus For Her Strength, Agility, & Iron Jaw

Circus performer Miss Lala was born Anna Olga Albertina Brown to Wilhelm Brown and Marie Christine Borchardt, on April 21 1858 in the former German (but now Polish) city of Stettin (Szczecin).Lala who was of mixed race, was also known as, Olga Kaira or Kaire, “Olga the Mulatto”, “Olga the Negress”, “The Venus of the Tropics”, “The Cannon Woman” and “The African Princess.” Olga was the name of Lala’s sister, Olga Marie Brown, who had died at five months old, almost three years before she was born. 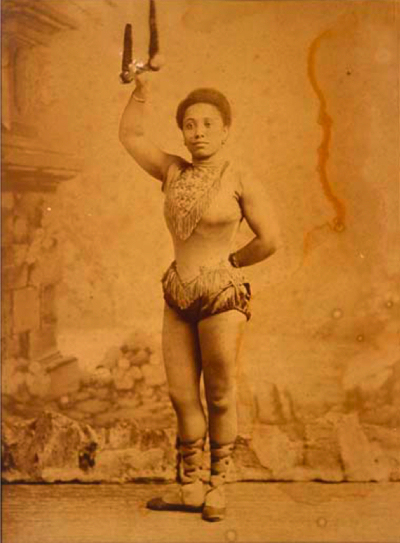 Although she was small of stature, Lala possessed incredible strength. She was an all-round circus artist and she worked at various times as a trapeze artist, a hand balancer, a wire walker, a strength artist and an iron jaw performer (A popular acrobatic strength act of the time) which saw her suspended high up in the air whilst holding a great weight using only her teeth. Her first appearance in the circus was at the age of nine but it was at 21, in France where she found fame.

In writings of the time, Lala is described as a ‘dusky’ Amazon and greatly admired for her agility and strength and one who was ‘strong above the average of womankind in the jaw’. In Paris, Lala’s iron jaw act was described as so much better than those which had come before including those of male iron jaw performers.

To perform her act, Lala had to use equipment which was made up of a thick double sided two inch wide leather and metal strap or tongue about 12 inches long with a leather mouth piece at one end which was gripped by the artist’s teeth. At the other end there could be an extension or a metal hook.

The grand finale of her act did not disappoint as Lala lifted a civil war era canon with wheels up into the air with her teeth. The canon was then fired with the aftershock of the blast causing Lala’s body to involuntarily rebound.

One reviewer/critic said “She does all that her muscular rivals have done and a great deal more. Lala as we have hinted is a representative of a dark skinned race but in the matter of strength she is prepared to assert her superiority of the boastful people who will have it that all virtues are associated with a light complexion.”

She toured around numerous circuses and music halls throughout Europe including the UK where she performed at London’s Royal Aquarium’s central hall and at Manchester’s Gaiety Theatre.Lala was part of the troupe called Folies Bergère and the Keziah Sisters. She partnered with another strength acrobat called Theophila Szterker/Kaira la Blanche. Together they were known as Les Deux Papillons (The two butterflies).