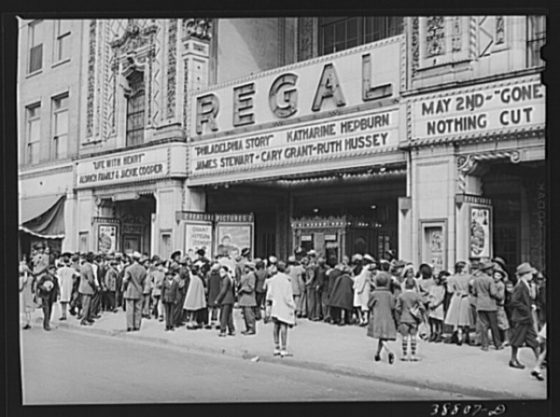 The Regal Theater was a hot spot for Chicago’s South Side public life from the late 1920s to the early 1970s. The theater was designed by architect Edward Eichenbaum of the firm of Levy & Klein, who earlier had produced the Diversey Theater (later renamed the Century Theater) on the North Side and the Marbro Theater on the West Side, the Regal Theater later outshined both of their earlier creations in its opulence.

The Regal catered specifically to the entertainment tastes of African Americans. The ceiling of the auditorium was designed to look like a huge canopy supported on the side walls with poles gilded in gold and offering peeks of a vauguely Middle-Eastern landscape between the poles. In the center of the polychrome canopy was a hole with a view of a deep blue sky with clouds and stars. The large proscenium arch around the stage was created to look like an Oriental temple, decked in gold, blue and maroon. The Regal Theater was also equipped with a state-of-the-art ventilation system, dressing rooms, an orchestra pit, and a Wurlitzer organ which could be hydraulically raised or lowered.

Top name celebraties were host of the theater including Cab Calloway, Louis Armstrong, Lena Horne, Dinah Washington, and Duke Ellington who performed frequently at the Regal. To much surprise, the Regal Theater had unusual hiring practices when it first opened. Lubliner & Trinz staffed its flagship palace with mostly African-American management, ushers, house musicians, cashiers and attendants. Most other major Chicago theaters at the time would only hire African-Americans for janitorial and behind-the-scenes jobs.

Although business boomed at the Regal Theater for its first couple years, during the Depression, attendance began to slip. Balaban & Katz had acquired the Lubliner & Trinz circuit in the early-1930’s, and as part of a massive cost reduction plan, decided to shut down the Regal Theater. However, due to a strong outcry of alarm from Chicago’s African-American community, the chain opted to leave the Regal Theater open.

By the late-1930’s, the Regal Theater was as popular as ever. Its hugely popular stage revues would continue, in addition to motion pictures, right up until the time the theater closed in 1968.