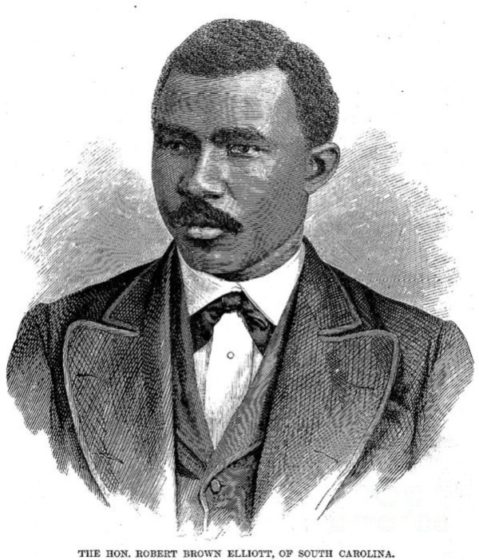 Robert Brown Elliott was an African-American member of the United States House of Representatives from South Carolina.

Historians state that he was born in Boston, educated at High Holborn Academy in London, and graduated from Eton College in 1859, although no evidence survives to confirm the claims. It does seem likely that he was well educated because he was recognized as being highly literate and learned.

Elliot moved from Boston to Charleston, South Carolina in 1867, where he accepted the position as associate editor of a black-owned Republican newspaper, the South Carolina Leader.

While living in Charleston, he met and married Grace Lee Rollin, a member of a distinguished Charleston free black family. The couple never had children. Elliott became one of the most influential blacks in the state of South Carolina because of his education. In 1868 Elliott, Jonathan J. Wright, and William Whipper were the first blacks admitted to the South Carolina Bar. Elliott soon became interested in politics and entered the political spotlight as a delegate to the 1868 constitutional convention. That same year he was an unsuccessful candidate for lieutenant governor but was elected to the state House of Representatives from Barnwell County. Serving in the House from 1868 to 1870, Elliott chaired the committee on railroads and sat on the committee on privileges and elections.

In 1870, Elliott defeated a white candidate for his first of two terms in Congress. Elliot was the first full-blooded man of color elected to Congress. He took his place in the U.S. House of Representatives on March 4, 1871. He employed his oratorical skills to condemn the Ku Klux Klan in South Carolina and to champion civil rights for African Americans. Elliot resigned from Congress in 1874 and returned to the South Carolina General Assembly, where he served as Speaker of the House from 1874 to 1876.

Elliott’s political career ended following the controversial election of 1876 and the return of the Democratic Party to power in South Carolina. After a series of federal patronage positions in South Carolina and Louisiana, and failed law practices, Elliott died penniless in New Orleans of malarial fever on August 9, 1884.