The 1960 Greensboro sit-ins are notorious for starting a national movement. However, those sit-ins were not the first. There were several sit-ins happening during that time, but most did not given the nationwide attention as the one in Greensboro.

In 1957, a protest in Durham, North Carolina, took place against the Royal Ice Cream Company. It was an establishment that practiced segregation with entrance doors that read, “White Only” and another marked “Colored Only.” A large partition divided the restaurant into two parts.

On June 23, 1957, a local minister, Rev. Douglas E. Moore, led seven attendees from his Sunday session at Asbury United into the segregated Royal Ice Cream Parlor, located nearby at the corner of Roxboro and Dowd Streets. A group of African-Americans entered through the back door, sat in the section reserved for white patrons, and asked to be served. The manager on duty that day called the police and the group was charged with trespassing. 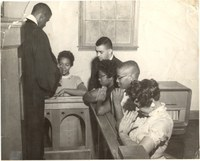 All members of the group were found guilty of trespassing the next day and were each fined $10 plus court costs. On appeal, the case went to Durham County Superior Court and a jury trial. An all-white jury rendered a guilty verdict on each defendant. The case was then appealed to the North Carolina Supreme Court, which upheld the law regarding segregated facilities. The group’s attorneys tried to appeal the decision to the United States Supreme Court, but they refused to hear the case.

After the unsuccessful attempt at desegregating the store, a group of high school NAACP members, of which more than half were girls, organized regular pickets outside the Royal Ice Cream Parlor under the direction of Floyd McKissick.

In the early 1960s, a plan was revealed by the Mayor’s Committee on Human Relations for the desegregation of Durham lunch counters. Durham officially became the seventh town in North Carolina to integrate its lunch counter service. Desegregation was in effect starting on a limited basis, and mass demonstrations by the black residents of the town continued until 1963, when public facilities were finally desegregated throughout Durham.