In this month in Black history, two legends of boxing and members of the Fabulous Four were born. “Sugar” Ray Leonard was born May 17, 1956, and Marvelous Marvin Hagler was born May 23, 1954.  The “Fabulous Four” got their name for being lighter weight class boxers that floated boxing’s popularity during the 1980s. The series of championship matches included legendary bouts and near decisions.

Sugar Ray and Hagler were involved in a match on April 6, 1987, known as “The Super Fight.” Coming from Caesar’s Palace, the bout had Hagler’s WBC Middleweight Title on the line. The match’s prize also included the lineal and The Ring Middleweight Titles. This bout was significant for several reasons:

THE FIRST AND ONLY FIGHT BETWEEN HAGLER AND ROBINSON

Something of a Sugar Ray hunter, Hagler defeated a “Sugar” Ray Seales twice in three showdowns throughout the 1970s.

He wouldn’t arrive on the world stage until a November 30, 1979 match against Vito Antuofermo for the undisputed Middleweight title. Coming close to victory, the contest ended in a 15-round draw and he wouldn’t win his first world Middleweight titles until the following September.

On that very same night, on the very same card–Olympic gold medalist “Sugar” Ray Leonard also arrived on the world stage. His 15-round march toward the welterweight championships saw him defeat Wilfred Benitez via TKO. This marks the first of his multii-weight division world titles.

RULES OF THE FIGHT

For 15-straight fights, Marvelous Marvin Hagler went undefeated. The majority of those fights were 15-round bouts. One of the standout bouts was his 3 of 12-rounds match against Thomas Hearns. Also of significance in that match was Sugar Ray serving as color commentator.

His final three matches were 12-rounders which weren’t the best for Hagler but worked for Sugar Ray who was just returning. The match featured a larger ring which also worked against Hagler who was often a close quarters boxer. Since Sugar Ray was faster and utilized a lot of footwork, having more land to cover and more land for Hagler to navigate worked for the Olympian.

So why were the match advantages for Sugar Ray? Hagler was the champion and could pick the lay of the land, so to speak. It all came down to $1 million dollars. Sugar Ray took a cut for the right to pick the conditions and Hagler got a bigger payoff.

THE FINAL FIGHT FOR HAGLER

After defeating John Mugabi and retaining his undisputed Middleweight crown in March 1986, he defended against Sugar Ray in what was the last match in his boxing career. There was supposed to be a rematch, but Hagler retired in 1988 since the fight wasn’t coming together. Sugar Ray retired after the fight—his third retirement—but offered to fight Hagler again in 1990. By this time Hagler had moved into acting.

As for Sugar Ray, the fight would be one of the last three wins in his career. It would also serve as one of two final wins against the Fabulous Four. The other was against Durán in December 1989 following a draw against Hearns in June 1989.

THE ONE THAT GOT AWAY

In March 1983 Hagler defeated Durán and in April 1985 defeated Hearns—both in defense of the undisputed Middleweight title.  As mentioned above, Hagler didn’t have encounters with the others since he was based in the middleweight division. He would lose in a 12-round contest against Sugar Ray in a split decision.

The Super Fight would garner mixed reactions from the sports and boxing press for a number of reasons. There were those who believed Hagler should’ve kept his title or that Hagler performed better. Others believed the match was Sugar Ray’s throughout and Hagler was a wash by this period.

Publications scored the match differently but Sugar Ray took the fight in the media’s eyes by a small amount. The fight is still a topic of debate less for the excitement level such as in Marvin Hagler’s fight against Thomas Hearns, but in regards to everything surrounding it. 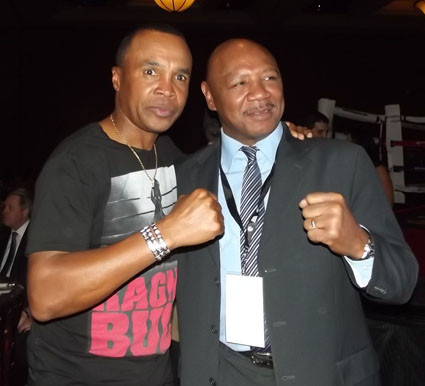