Super Man Monday: First Black Television Journalist And The Man Who Introduced The Nation Of Islam To Mainstream 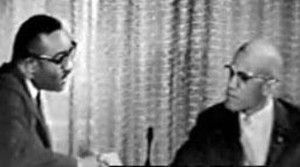 Lomax was born in Valdosta, Ga. and attended Paine College in Augusta. During his years at Paine, Lomax was appointed editor of the student newspaper prior to his graduation in 1942. He earned his M.A. at American University in 1944 and a Ph.D. from Yale University in 1947. After beginning his journalism career with the Afro-American and Chicago Defender, he joined WNA-TV in New York, becoming the first African-American television journalist. After telling fellow journalist Mike Wallace about the Nation Islam in 1959, the two of them produced “The Hate That Hate Produced,” introducing the Nation to the mainstream. As a freelance writer, Lomax wrote for The Nation, Harper’s, and The New Leader, and hosted a semi-weekly program on Los Angeles’ KTTV from 1964 to 1968. Sadly, Lomax was killed in a car accident in 1970.