The Back Story: Meet The Man Behind This Powerful Image

You’ve likely seen the picture of this runaway slave exposing his scourged back 100 times. Besides the obvious, did you ever wonder how or why he endured such horrendous treatment?  The true story of Mr. Oliver Gordon’s brutal ordeal is as intriguing as the image.   It is one  of determination and resourcefulness.

Gordon had received a severe whipping for undisclosed reasons in the fall of 1862. This beating left him with horrible welts on much of the surface of his back. While the plantation owne 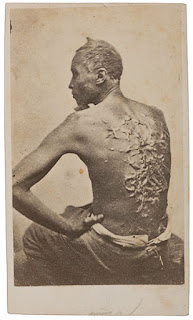 r discharged the overseer who had carried out this vicious attack, for the next two months as Gordon recuperated in bed, he decided to escape.

In March 1863 he fled his home, heading east towards the Mississippi River. Upon learning of his flight, his master recruited several neighbors and together they chased after him with a pack of bloodhounds. Gordon had anticipated that he would be pursued and carried with him onions from the plantation, which he rubbed on his body to throw the dogs off-scent. Such resourcefulness worked, and Gordon—his clothes torn and his body covered with mud and dirt—reached the safety of Union soldiers stationed at Baton Rouge ten days later. He had traveled approximately eighty miles.

While at this encampment Gordon decided to enlist in the Union Army. As President Lincoln had granted African Americans the opportunity to serve in segregated units only months earlier, Gordon was at the front of a movement that would ultimately involve nearly 200,000 African Americans.

It was during his medical examination prior to being mustered into the army that military doctors discovered the extensive scars on his back.

McPherson and Oliver were then in the camp, and Gordon was asked to pose for a picture that would reveal the harsh treatment he had recently received.