The ‘Jeanes Supervisors’ United Together to Educate the South

The #Jeanes Supervisors were a team of #African American teachers who worked in southern rural schools and communities in the United States between 1908 and 1968. The group were also referred to at times as Jeanes Teachers, Supervising Industrial Teachers, or Jeanes Workers. The group got their name from the Philadelphia philanthropist Anna T. Jeans, who provided funding for #black education in the South. The group was organized with about 2,ooo workers across 16 southern states. Most of the people working in the group were women of color because those were the ones who had the worst chance of obtaining a job in the south. The charity gave black people a chance to receive a legitimate elementary education. Eventually, the foundation leaders encouraged black people to vote.

Jeanes Supervisors focused on community self-help. They helped with instruction on academic schools subjects and industrial information. The group helped individuals understand how to obtain inexpensive items for use home and school use to help with their education. During those days, industrial classes were sewing, food preparation, and bricklaying. These skills were often taught throughout the community and with the help of the community members.

Jeanes Supervisors submitted monthly reports to their superintendents and to the state agent for Negro education. The group also held annual exhibits of industrial work by community parents and students. Anna T. Jeanes created an endowment fund of $1 million. The fund was intended to assist community, county, and rural schools for African Americans in the southern United States. The Jeanes fund was certainly one of the most significant because it help with the educational assistance to black schools and black students all over the South. 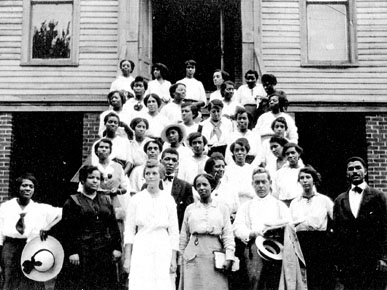 Jeanes named Booker T. Washington and Hollis Burke Frissell to head up the fund and directed them to appoint a board of trustees to manage it. The fund was called the Negro Rural School Fund, or Jeanes Fund. Word about the groups work soon spread, and county superintendents went to the board of education to see if they could get the Jeans Supervisors salaries paid by the state. By 1914, nineteen Alabama counties were willing to pay a portion of the salaries, which was a big step in the right direction. In 1929, the work of the Jeanes Superviors was fully recognized by the Alabama State Department of Education and instead of just paying a portion of the salaries, they fully funded 12 Jeanes Supervisors. By 1930, the group had received funds from several philanthropic sources. The Jeanes Foundation is still known for its success and has created a place with the NAACP as well as clubs and PTA committees in the minority community.