Negro History Week was initiated by Dr. Carter G. Woodson in 1926. His goal was enlightening the descendants of slavery  to their history that had been neglected, resulting in him creating a Negro History Week in February 1926. At first, he was met with a lukewarm response. Dr. Carter worked diligently for over twenty years promoting his dream. His brain child has been enhanced into a  Black History Month (1976) in the United States, and was followed by Great Britain (1987) although it is celebrated in October, along with Canada, who, joined in 1995. Notably, countries in Europe, South America,  and Africa have also acknowledged Dr. Carter’s life-long dedication.

He was given credit for being the father of Black History Month (B. H. M.) and that is justified. Notably, he died in 1950 (December 19, 1875 – April 3, 1950)  not having any knowledge of the present-day celebrations in his honor. Surely Dr. Carter would approve acknowledgement of his life-long dedicated work. Suffice to say, his Negro History Week has been eternalized as a  concept. 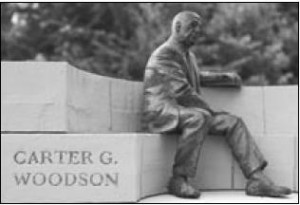 Now it is time to extend his concept even further. In his era,  he could only use the word Negro.  After his death, the concept transformed from a week  into a month together with  using  black. Black became beautiful in the 60s and slowly replaced Negro. In 2015, we can enhance Dr. Carter’s concept even further by embracing African to define descendants of slavery as well as the victims of colonialism. The crowning adulation would  include history from the beginning  of civilizations until the present-day. The thoughts of these  enhancements surely were impossible during Dr. Carter era in 1926.

To be more effective the established celebrations and festivities should be continued. At the same time, his concepts can be presented any time during the year putting   it on par with all other cultures’ history. Let us pause and give adulation and homage to Dr. Carter G. Woodson founder of Negro History Week in 1926, and also the African-British history month along with Canada’s celebrations, as well as paying tribute to countless activists, organizations and governmental agencies that observe this tradition annually. African communities everywhere owe them all a debt of gratitude.

« Previous PostWilliam Clarence Matthews: Pioneer Athlete, Politician, and Lawyer Next Post »Judy Johnson: One of the Greatest Third Basemen of the Negro Leagues