The Price of Being Born of Mixed-Race During Slavery

It is easy to think of mixed children during #slavery as the product of white slave owners, white overseers, and African slave women. The truth is not all mixed-raced children were the result of the African women being raped. A free woman of color could have had a child or children fathered by a white man. The biracial children in this case were considered free; it was the mother’s status that determined whether a child was free or not.  “The child’s status determination was due to the 1662 law “in the case of a child one of whose parents was free and one slave, the status of the offspring followed that of the mother,” (Foner 52), these children would often then become their father’s property.

White women did not just have a new found revelation and start loving the arms of a #black man. Many white women and black men also had affairs, more often than expected. The offspring of these couples were also considered free since, the mother’s status of slavery or freedom was the determining factor. No, mix-raced children did not have it easy, just because the color of the skin. In actuality, these children had a difficult life, very rarely were they accepted by the white communities or the black communities. Most white fathers usually denied that a slave’s light-skinned offspring was his, even though sometimes the resemblance could not be denied. 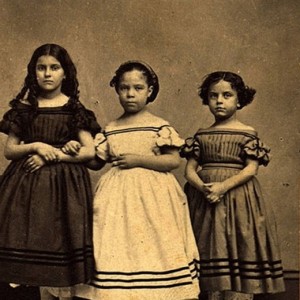 “The poor white children of the slave mother are sold like brutes to the highest bidder, by their worse than brute father, while their free born brothers and sisters, who are not whiter than they in complexion, or purer in heart, inherit the father’s wealth, and enjoy the blessings of that freedom which is the choicest earthly gift from God to man. Thus slavery degrades and makes fiendish the dearest relations and the purest instincts of humanity. “(MerryCoz)

A mixed-child born to a white woman was often abandoned or sold secretly. If the children were the product of a slave owner’s dalliance with a slave woman, they received the same enslaved treatment as any other slave, and were also looked upon with contempt by their mistresses. The children would often be singled out for all sorts of abuse from forcing them to wait on their white half-siblings to enduring physical mistreatment.

Mixed-race women were particularly sought after by white men. Their fairer complexion often gave them more attractive features, and white men desired to buy them and use them as concubines. After the Civil War, most people of mixed-race, especially if they resembled the white parent in skin tone and other features, simply moved away from the area in which they were born. They could often ‘pass,’ as the term was at the time, meaning to claim that they were not racially mixed.  Many would form new identities and create a new life for themselves never looking back.