Johanna July, a black Seminole, was born around 1857 in Nacimiento de Los Negros, the settlement established in Northern Mexico following the emigration of Indian and black Seminoles from the Indian Territory in 1849.

During the 1870s, the U.S. Army was looking for translators and scouts who were familiar with the border country. Black Seminoles were employed on their returned to the United States. Many of them settled in or near Eagle Pass, Texas in 1871.

There Johanna July learned to tame horses and herd the family’s goats and cattle. With the death of her father, she worked the stock and continued to tame wild horses for the U.S. Army and area ranchers.

July was described as a young girl with thick braids and wore long gold earrings and necklaces. She developed her own method of taming horses. She would lead a horse into the Rio Grande, swim up, grab the mane, and gently ease astride. As the horse tired from swimming, he lost the strength to buck.

For July, very little changed in her life as she got older. After the death of her first husband, she married two more times and continued to tame horses and herd stock. About 1910, Johanna moved to Brackettville where she lived the rest of her life in a small house on a hilltop near the cemetery. Family members recall her as that old lady who rode sidesaddle and went barefoot around the house. She died shortly after World War II and is buried in the Brackettville Seminole Cemetery. 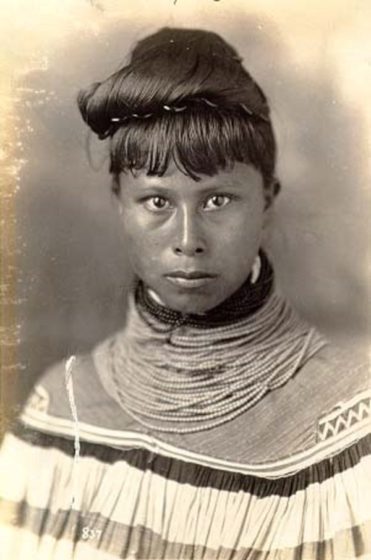