Was The First Slave Owner In America A Black Man?

Anthony Johnson was the first prominent #black landholder in the English colonies.  Johnson arrived in Virginia in 1621 aboard the James.  It is uncertain if Johnson arrived as an indentured servant or as a slave, early records list him as “Antonio a Negro.”  Regardless of his status, Johnson was bound labor and was put to work on Edward Bennett’s tobacco plantation, Warresquioake.  In March of 1622 local Tidewater Indians attacked Bennett’s plantation killing fifty-two people.  Johnson was one of only five on the plantation who survived the attack.

In 1622 “Mary a Negro Woman” arrived aboard the Margrett and John and like Anthony, she ended up on Bennett’s plantation.  At some point Anthony and Mary were married; a 1653 Northampton County court document lists Mary as Anthony’s wife.  It was a prosperous and enduring union that lasted over forty years and produced at least four children including two sons and two daughters.  The couple was respected in their community for their “hard labor and known service,” according to court documents.

At some point between 1625 and 1640 Anthony and Mary gained their freedom and moved to Virginia’s Eastern Shore where they purchased a modest estate.  They began raising cattle and hogs and by 1651, Johnson claimed 250 acres of land along Pungoteague Creek. He claimed the land by virtue of five headrights, one of which was in the name of his son, Richard Johnson.  It is impossible to know if Anthony imported the other men whose names appear on the headright land claims, but it is possible that he did.  It is also possible that he purchased headright certificates from other planters.  Either way, 250 acres was a sizeable plantation by the standards of the day.  By 1654 Johnson’s two sons, Richard and John, both owned acreage adjoining their father’s land.

In addition to being a landowner, Anthony Johnson was also a slaveholder.  Court records reveal that Johnson won a 1655 case against white planter, Robert Parker, to retain ownership of Johnson’s slave, John Casor.  Casor, with the help of Robert Parker, tried to claim that he was an indentured servant, not a slave.  Although the courts initially found in Parker’s favor, temporarily freeing Casor, they subsequently reversed the decision, returning Casor to the service of his master, Anthony Johnson.

A fire in 1653 destroyed much of the Johnson’s plantation.  As a result of the fire, Anthony and Mary petitioned the court for tax relief, which was granted on the grounds that they would have difficulty obtaining a livelihood.  Sometime in the 1660s Anthony and Mary Johnson, their dependent children, and their married sons, John and Richard, all moved north into Maryland.  In Maryland, Anthony leased a 300-acre farm, Tonies Vineyard, where he lived until his death in 1670.  Mary survived her husband, and in her 1672 will she bequeathed a cow to each of her grandsons.  Five years later, in 1677, Anthony and Mary’s grandson, John Jr., purchased a 44-acre farm which he named Angola.  John Jr. later died without leaving an heir, however, and by 1730, the Johnson family had vanished from the historical records. 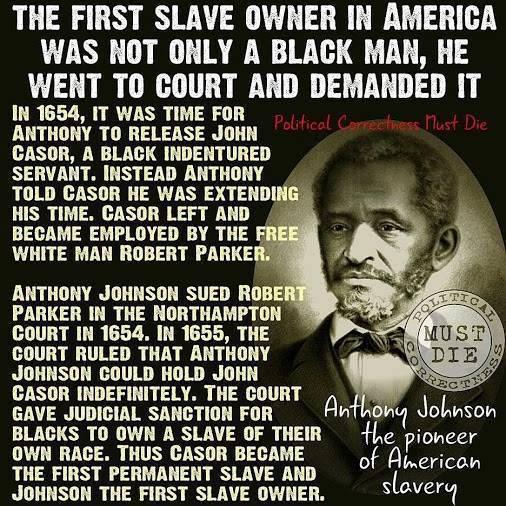