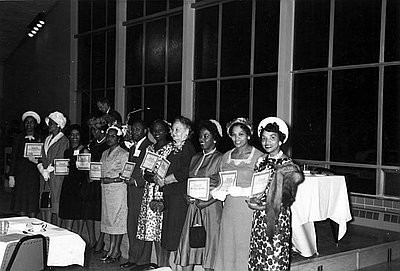 Willie Mae Young Hart made a habit of breaking the color line. She helped operate Portland’s first black-owned cab company and was the first African American nurse to work at Portland’s Physicians and Surgeons Hospital. Hart was also a founding member of the Portland Chapter of the National Council of Negro Women (NCNW) and Women In Community Service (WICS).

Willie Mae Young was born on April 4, 1915, in Vicksburg, Mississippi, where she attended a Catholic high school and trained informally as a nurse. She relocated to Oregon in 1939, first to Coos Bay and then to Portland, where she worked in the shipyards on Swan Island.

Hart was a member of the Portland NAACP. Its efforts, in collaboration with the Urban League and State Representative Mark O. Hatfield, resulted in the 1953 Public Accommodations Law (also known as the Oregon Civil Rights Bill), which effectively ended discrimination in public places.

After World War II, Hart, her husband Theodore R. Hart, and their friend Carlos D. Martin operated the Beacon Cab Company, the first African American-owned cab company in Portland. They only had a few cars, but during the Vanport Flood in 1948 those cabs ran for free to anyone in need.

The cab company closed following a run-in with the law, due in part to Commissioner Dorothy McCullough Lee’s enforcement of city restrictions on taxicabs, Hart studied nursing at Oregon Health Sciences University and became the first African American nurse to work at the Physicians and Surgeons Hospital.  In 2010, she was still using her nursing skills to care for people in North Portland. Willie Mae Hart passed away in June 2017, at age 102.