It happened among the Zong ship heading for Jamaica in 1781. The ship was coming to the end of its voyage from the west African coast and was carrying 470 slaves. Water and food were running low on the ship and there was a disease outbreak as well.

The captain reasoned that the African slaves were going to die anyway, so in order to reduce the owner’s losses, he would throw overboard any slaves he felt were too ill to recover. The insurance of the voyage would cover slaves lost due to drowning.

The captain gave the order: 54 Africans were chained together, then thrown overboard. Soon after, 78 were drowned over the next two days. By the time the ship had reached the Caribbean, 132 African slaves had been murdered.

When the ship returned to England the owners made their claim — they wished to be compensated the full value for each slave lost. The claim might have been honored had if it had not been for former slave Equiano, then living in England, who learned of the tragedy and alerted an abolitionist friend of his. The case went to court. At first, the jury ruled in favor of the ship’s owners. Since it was permissible to kill animals for the safety of the ship, they decided it was permissible to kill slaves for the same reason.

However, this was not the only case where slaves were thrown overboard. On the Le Rodeur in 1812, there was an outbreak of ophthalmia, a disease that was known to cause temporary blindness, which was afflicting both slaves and crew members. The captain feared that the blindness was permanent; knowing that it would be difficult to sell blind slaves, he made the decision to throw 39 living slaves over the rails to their death. Similar to the case on board the Zong ship, he also was looking to get paid for the lost of the slaves through the insurance. 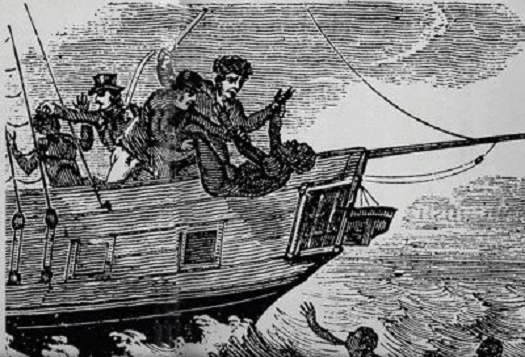