A Victory Against Institutionalized Racism: The Case of Shelley V. Kramer 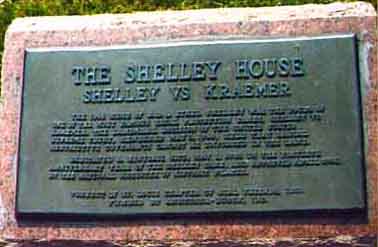 After the short-lived process of the Reconstruction period that took place after the conclusion of the Civil War, white Americans came up with new ways to exclude blacks from full political, economical, and social progress through what is well known as Jim Crow segregation laws. One of the ways blacks were kept separate from whites was through restrictive housing covenants which blocked home-owners in certain neighborhoods from selling their houses to black families. Housing covenants successfully locked many black families out of more affluent neighborhoods where resources were more readily available. In 1948, a landmark Supreme Court case called Shelley v. Kraemer finally overturned the legality of these restrictive covenants.

In 1945, a black family called the Shelley’s bought a home in St. Louis, Missouri, unaware that a restrictive covenant banning blacks from owning it was put in place in 1911. Knowing about the covenant, a man named Louis Kraemer who lived some ten miles away, attempted to stop the Shelley’s from taking possession of the property. The case was taken to trial at the Missouri Supreme Court, and the Shelley family lost. It was found that the terms of such a private agreement were enforceable.

The Shelley’s took their case all the way to the Supreme Court, where justice was eventually served. In 1948, the Supreme Court unanimously ruled in favor of the Shelley’s, stating that it was not constitutional for a court to enforce a racially based restrictive covenant. Though the agreement was private, it was found that the Fourteenth Amendment prohibited the State from enforcing restrictive covenants, and that the home-buyers were willing buyers to willing-sellers. Equal protection of laws were a part of the Fourteenth Amendment, and it was not possible for the Supreme Court to enforce such an agreement based on race.

Though the Shelley v. Kraemer case was a victory for African Americans against institutionalized racism, new ways to lock African Americans out of certain neighborhoods were abundant. In the 1960s and 1970s, when whites in cities were fearing an increasingly black population, families fled to the suburbs in droves, an event now known as white flight. Real estate developers capitalized on white fears, often placing sold signs on certain properties in order to influence families to then put their homes on the market, afraid of a changing demographic. Real estate agents would also restrict the types of houses shown to black families, ensuring that they would not buy property in established predominantly white neighborhoods. Banks would provide more housing loans to white families and reject black ones. As a result of this, many U.S. cities remain just as or more so segregated than they were decades ago.