After 1901, No African American Served In U.S. Congress For Nearly Three Decades. Here’s Why 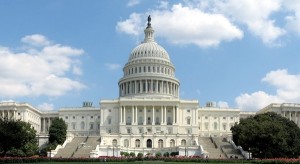 On December 5, 1887, for the first time in almost two decades, Congress convened without an African-American Member. “All the men who stood up in awkward squads to be sworn in on Monday had white faces,” noted a correspondent for the Philadelphia Record of the Members who took the oath of office on the House Floor. “The negro is not only out of Congress, he is practically out of politics.”1 Though three black men served in the next Congress (51st, 1889–1891), the number of African Americans serving on Capitol Hill diminished significantly as the congressional focus on racial equality faded. Only five African Americans were elected to the House in the next decade: Henry Cheatham and George White of North Carolina, Thomas Miller and George Murray of South Carolina, and John M. Langston of Virginia. But despite their isolation, these men sought to represent the interests of all African Americans. Like their predecessors, they confronted violent and contested elections, difficulty procuring desirable committee assignments, and an inability to pass their legislative initiatives. Moreover, these black Members faced further impediments in the form of legalized segregation and disfranchisement, general disinterest in progressive racial legislation, and the increasing power of southern conservatives in Congress.

In the decade after the 1876 presidential election, the Republican-dominated Reconstruction governments, which had provided the basis for black political participation in the South, slowly disintegrated, leaving the rights of black voters and political aspirants vulnerable to Democratic state governments controlled by former Confederates and their sympathizers. The electoral crisis of 1876 also revealed fissures within the GOP, as many party stalwarts focused on commercial issues rather than on the volatile racial agenda previously pursued by the Republicans. This period marked the beginning of a “multigenerational deterioration” of the relationship between black and white Republicans.2 By the 1890s, most Black Americans had either been barred from or abandoned electoral politics in frustration. Advocacy for blacks in Congress became substantially more difficult.3 After Representative White’s departure from the House in March 1901, no African American served in the U.S. Congress for nearly three decades. The length and persistence of this exile from national politics starkly conveyed the sweeping success of the system of racial segregation imposed upon blacks by law and custom, known widely as “Jim Crow.”