Marie-Joseph Angélique: Escaped Bondage Only to Be Recaptured and Tortured to Death

Marie-Joseph Angélique was an enslaved Black woman in Montréal. In 1734, she was charged with arson after a fire leveled Montréal’s merchants’ quarter. The story told is that Angélique committed the act while trying to escape bondage. Although there was never any evidence as to whether Angélique was actually guilty of the crime, she was convicted, tortured and hanged.

Angélique was born in Madeira, Portugal, around 1705. There is not much known about the first 20 years of her life. She first lived in New England, until François Poulin de Francheville, a French businessman, bought her and took her to his home in Montreal. De Francheville died not long after her arrival, but Marie-Joseph was still owned by his wife, Therese de Couagne. It is she who renamed Marie-Joseph “Angélique,” after her dead daughter.

Angélique fell in love with a white servant. In the middle of the winter of 1734, the pair planned an escape. They fled together, hoping to reach New England and from there to Europe. But bad weather set in and forced them to stop around Montreal where the couple was discovered by arrested and escorted back to town.

The Montreal community strongly disapproved of the love affair between the couple because of their race. After the capture, Angélique was sent back to the widow Francheville and her intended escape went unpunished. But, Thibault, was sent to prison. Angélique visited him as often as allowed, taking him food and providing support. Two months later, Thibault was released, on April 8, 1734, two days before the fire of Montreal. 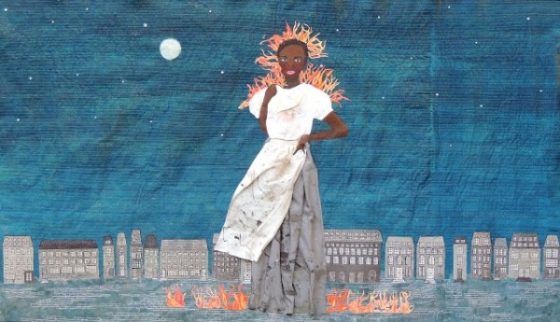 Marie-Josèph Angélique
« Previous PostMcKinley Burnett: Attorney for the Plaintiffs in the Brown Vs. Board of Education Case Next Post »Lutie Lytle: First African American Admitted to the Kansas Bar