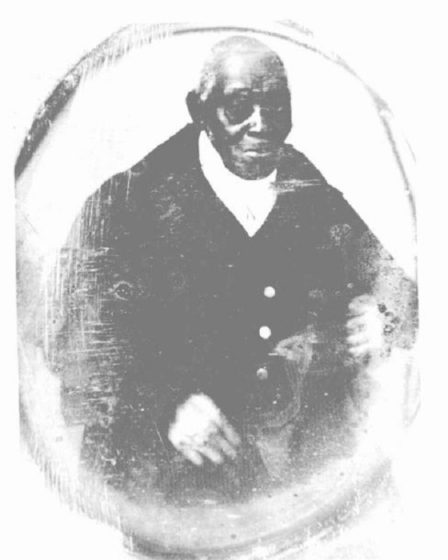 Agrippa Hull was a prominent figure of the revolutionary era. He served for six years and two months in Washington’s Continental Army, which earned him a badge of honor for this extended service.

Hull was born free in Northampton, Massachusetts on March 7, 1759. Little is known of his father, who died when Hull was an infant; but his parents were members of the Congregational Church where Jonathan Edwards occupied the pulpit.

When economic stress hit the Hull family, his mother sent him to Stockbridge in the Berkshire Hills of western Massachusetts, to live with a free black farming family. It was there Agrippa grew up in the mission town largely composed of Stockbridge Indians.

Shortly after his eighteenth birthday, Agrippa enlisted in the Continental Army, where he was assigned as an orderly to General John Paterson of the Massachusetts Line. At Paterson’s side, Hull witnessed the surrender of British General John Burgoyne at Saratoga, New York, and endured the winter of 1777-78 at Valley Forge, Pennsylvania. He was also part of the battle at Monmouth Courthouse, New Jersey in June 1778.

In May 1779, Hull was reassigned to Kosciuszko, who arrived in 1776 to offer his services as a military engineer to the Continental Congress and was designing the fortifications at West Point. Hull was at Kosciuszko’s side for 50 months, serving as attendant and messenger. After Kosciuszko was sent south to serve as the chief military engineer of Washington’s Continental Army, Hull was put into the bloodiest and most intense phase of the war. Reaching North Carolina in October 1780, Kosciuszko and Hull confronted the pitiful condition of Washington’s army.

Hull had many opportunities to witness the operation of plantation slavery in the South, even as its fabric was shredding. By the time the southern phase of the war ended in May 1783, Hull had participated in almost every major battle of the bushwhacking campaign—at Cowpens, Eutaw Springs, Ninety-Six, Guilford Courthouse, and the Siege of Charleston, which finally brought the British to their knees.

Returning to Stockbridge, Hull found a place in the household of Theodore Sedgwick, a well-born and successful young lawyer who had just won a landmark slavery case before the Massachusetts Supreme Judicial Court that gained the freedom of Elizabeth Freeman, soon known as Mum Bett. Hull would serve Sedgwick’s family for almost two decades, working alongside Mum Bett, who virtually mothered the brood of Sedgwick children. Agrippa Hull died on May 21, 1848, Stockbridge’s last surviving veteran of the American Revolution.