Anna Pauline “Pauli” Murray was an outspoken civil rights activist, lawyer, professor, and writer. Murray was born on November 20, 1910, in Baltimore, Maryland. After losing her parents at a young age, she was sent to North Carolina to be raised by her aunt.

After high school, Murray applied to the University of North Carolina in 1938 to begin her studies in sociology. Her application against state laws, which required “separate but equal” institutions, garnered national attention. She was later turned down by Harvard as well. Her unsuccessful campaign for admission was the first time that she experienced a saying that she would repeat throughout her life: one woman with a typewriter constitutes a movement.

Murray attended Howard Law School in 1941, but experienced discrimination due to her gender instead of race. Howard spent time in private practice before pursuing a doctorate in law at Yale University in 1960. When she finished her doctorate in 1965, Murray became the first African-American to be awarded a J.D.S. degree from the university.

Murray enjoyed writing and by 1951, she published <State’s Laws on Race and Color. Thurgood Marshall called the book “The Bible for civil rights lawyers.”  She also shared her own life story in 1956’s Proud Shoes. In 1977, Murray became the first African-American woman to become an Episcopal priest. Murray received numerous awards for her many contributions and received several honorary. She died in 1985. 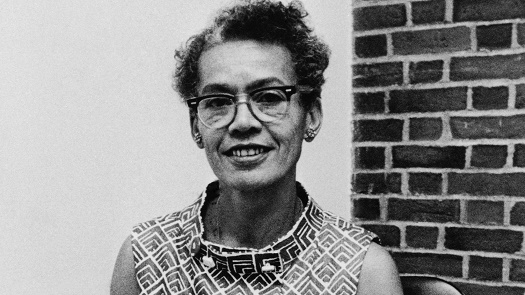 Hope is a crushed stalk

Hope is a bird’s wing

Broken by a stone.

Hope is a word in a tuneless ditty —

A word whispered with the wind,

A dream of forty acres and a mule,

A cabin of one’s own and a moment to rest,

A name and place for one’s children

And children’s children at last . . .

Hope is a song in a weary throat.

Give me a song of hope

And a world where I can sing it.

Give me a song of faith

And a people to believe in it.

Give me a song of kindliness

And a country where I can live it.

Give me a song of hope and love

And a brown girl’s heart to hear it.

Anna Pauli Murray
« Previous PostPoet Robert Hayden's, "Frederick Douglas" Next Post »After the Emancipation Proclamation: Slaves Kept in the Dark About Being Free