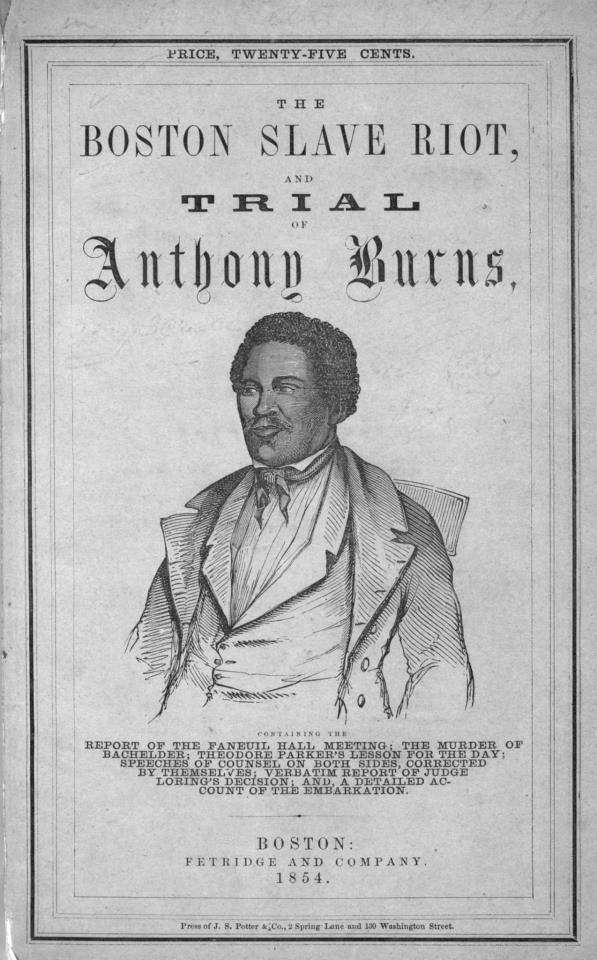 One of The First, Interracial Riots, Blacks and Whites, Anti-Slavery Supporters Rioted together, in defense of Anthony Burns, a Self-Emancipated “Fugitive Slave”!

Click and Listen tonight at 8pm to The Gist of Freedom as we discuss Interracial riots and anti-slavery movements from Benjamin Quarels’ Book, The Black Abolitionists with Professor Kwame Shabazz and Ty Gray-El ( A Black Woman’s Smile)and Preston Washington (genealogists).

In 1854, Anthony Burns, a self emancipated former enslaved black man, from Virginia, was arrested in Boston. His capture enraged black and white abolitionists. Two days after the arrest, a number of them attacked the federal courthouse with a battering ram, hoping to free Burns. Their attempt failed.

Burns’s defense lawyer, a black attorney Robert Morris was not successful. After a brief trial, he was ordered returned to slavery. On June 2nd, thousands of people lined the streets of Boston. They hissed and shouted, “Shame! Shame!” as federal authorities escorted Anthony Burns to a ship waiting in the harbor. It took approximately 2,000 troops and cost $40,000 to maintain order and return the black man to bondage. No fugitive slave was ever captured in Massachusetts again.

Anthony Burns was not the first Self Emancipated Black man arrested in Boston and returned to slavery. But he was the last. More than any other city in the North, Boston was considered a haven for runaways; its black community was especially strong and well organized and it was a city where black and white abolitionists were willing to act on their convictions. All this came into play in May of 1854.

In an attempt to find a compromise an appeasement to the slavers in their quest to rid the country of free blacks and members of the black Anti-Slave Movement led by hundreds of activists such as Frederick Douglass, Congress had passed the Fugitive Slave Act in September of 1850. The new law targeted these groups, their self help organizations and institutions, the law encouraged and deputized anyone who sought to arrest a suspected “Fugitive”.

Anyone who aided an escaped slave or interfered with his or her arrest was subject to fine and imprisonment. The law significantly increased anti-slavery sentiment among Northerners. Vigilance Committees were formed to aid fugitive slaves, and some of the more militant abolitionists turned to civil disobedience.

In the early spring of 1854, Anthony Burns escaped from Alexandria, Virginia, by hiding on a ship bound for the North. He arrived in Boston at the end of March; before long, the slaver learned of his whereabouts and came to reclaim him. Marshalls arrested Burns and confined him to the federal courthouse.

Word of the arrest spread quickly. Handbills announcing “The Kidnappers Are Here!” appeared all over the city. Slavery opponents hastily dispatched letters seeking support from abolitionists in other towns.

Two days after the arrest, close to 5,000 abolitionists, most of them white, gathered at Fanueil Hall. A smaller group, mostly black men and women, met at the Tremont Temple. While the Fanueil Hall group debated strategy, those meeting at the church decided to act: they would march to the courthouse and free Burns.

A small group of blacks and the white minister Thomas Wentworth Higginson used a huge beam to create an opening in a door of the courthouse. A shot rang out. Half a dozen sheriff’s deputies beat back two men who attempted to enter the building. Meanwhile, those meeting at Fanueil Hall had learned of the rescue-in-progress, and several hundred-headed to the courthouse. Police later reported that protesters threw bricks, fired pistols, and attacked another door with axes.

It was all in vain. After the successful rescue of Shadrach Minkins in 1851, federal authorities were better prepared.

Order was restored but only after one deputy was shot dead, several men wounded, and 13 arrested. Burns remained in custody.

A week of court hearings followed. Believing that resistance was “of no use” and that “I shall fare worse if I do [resist],” Burns sealed his own fate by identifying Charles Stuttle as his owner. The simple statement was all it took for Stuttle to meet the criteria of the Fugitive Slave Act. The defense lawyers pressed the presiding judge to declare the law unconstitutional, but he refused. His decision returned Anthony Burns to slavery.

The week’s events were widely covered in the northern and southern press. Some in the South recognized that “victories” such as this one would prove short-lived. Northerners’ resolve increased when they saw that if slaveholders’ power could reach Boston, it could reach anywhere. Determined that federal law be upheld, President Franklin Pierce ordered troops to maintain order and insisted that a U.S. Navy ship transport Burns back to Virginia.

On the day of Burns’s departure, an estimated 50,000 people filled the streets between the federal courthouse and Long Wharf. To keep them from interfering with the “vile procession,” as Richard Henry Dana called it, took 1,500 Massachusetts militiamen, the entire Boston police force, 145 federal troops with cannon, and 100 special deputies. Black crepe covered store and office windows and American flags hung upside down. Protesters suspended a coffin across State Street, with the word “Liberty” painted on its side.

Within nine months, the Reverend Leonard Grimes, minister of one of Boston’s black Baptist churches, traveled south and purchased Burns’s freedom with $1,300 raised by the church. Burns’s supporters published a book about the case and used the proceeds to help pay his expenses for two years study at Oberlin College. He served first as pastor of a black Baptist Church in Indianapolis and then moved across the border to a small settlement in Canada, where he was pastor of another Baptist Church. In poor health since his days of enslavement, Anthony Burns died there on July 17, 1862 at the age of 28.

in 1854, Anthony Burns, a self-emancipated former enslaved man, from Virginia, was arrested in Boston. His capture enraged black and white abolitionists. Two days after the arrest, a number of them attacked the federal courthouse with a battering ram, hoping to free Burns. Their attempt failed. Burns’s defense lawyers were no more successful. After a brief trial, he was ordered returned to slavery. On June 2nd, thousands of people lined the streets of Boston. They hissed and shouted, “Shame! Shame!” as federal authorities escorted Anthony Burns to a ship waiting in the harbor. It took approximately 2,000 troops and cost $40,000 to maintain order and return the black man to bondage. No fugitive slave was ever captured in Massachusetts again.