The #Mangbetu are a group of people who are located in the Democratic Republic of the Congo, living in Orientale Province. The majority of the people live in the villages of Poko, Watsa, Rungu, and Wamba. The Mangbetu achieved a very high level of technological and material development, as indicated by early reports from European explorers. Georg Schweinfurth, the first European to reach the area, visited Mbunza, the Mangbetu ruler, in 1870, and described thousands of subjects at Mbunza’s court as well as hundreds of nobles. The Mangbetu are known for their highly developed art and music. One instrument associated with and named after them is the Mangbetu harp or guitar. The Mangbetu stood out to European explorers because of their elongated heads. 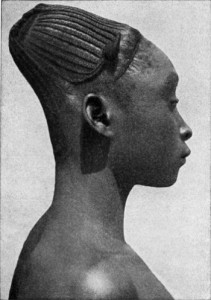 For years the group practiced “#Lipombo,” which is a custom of skull elongation. It was a status symbol among the Mangbetu ruling classes at the beginning of the century and later practiced in other countries. The Mangbetu were noted for their distinctive look, at birth the heads of the babies were tightly wrapped with cloth to give the head a streamlined appearance. The practice began dying out in the 1950s with the arrival of more Europeans. Queen Nefertiti is often depicted with what may be an elongated skull, as is King Tutankhamen. The tradition of Lipombo survived until the middle of this century, when it was outlawed by the Belgian government.