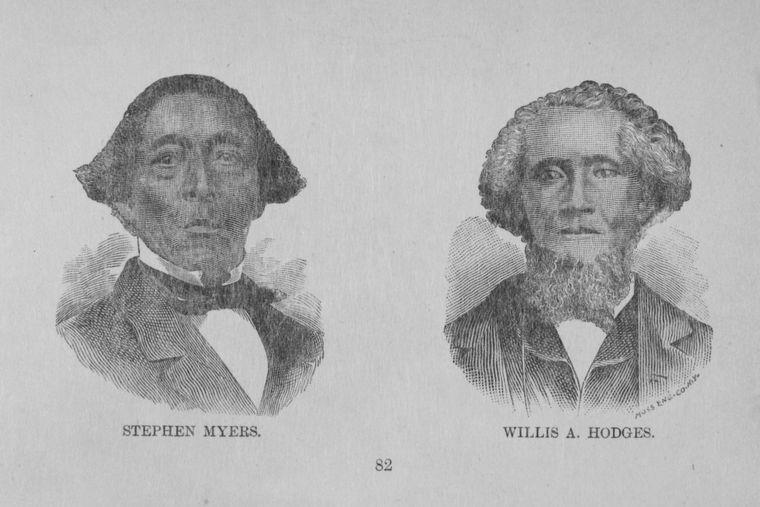 Willis Augustus Hodges, the publisher of a the weekly newspaper, The Ram’s Horn and an Underground Railroad agent, Hodges helped escaping African Americans move, and establish the settlement, Blacksville. They used the land granted to them by Peterboro abolitionist Gerrit Smith. Gerritt Smith’s antebellum “scheme of justice and benevolence” championed black voting rights by the redistribution of land. He gave 3,000 free black New Yorkers 40 acres.

Henry Highland Garnett was also a recipient of Smith’s land grant. Smith in a political move to circumvent the property requirement for poor blacks and whites, gave more than three thousand land grants, an averaging of 40 acres apiece.

as we continue our reading and discussion about the book, The Black Abolitionists, by Benjamin Quarles. Call in and join the discussion with panelists, Ty El-Gray ( A Black Woman’s Smile) and Preston Washington ( Genealogist)

The Ram’s Horn was a weekly newspaper published and edited by Willis A. Hodges, a free Black born in Virginia. His family moved to New York in the mid-1830s after Nat Turner’s rebellion prompted the Virginia legislature to severely limit the liberties of free Blacks, but they kept their family farm in Virginia. Active in school reform in Williamsburgh, the Black community in which he settled, he owned a grocery store and attended the Abyssinian Baptist Church.

By the 1840s, Hodges functioned as one of the most outspoken advocates for abolition and equal rights in the State. His abolitionist newspaper caught the eye of Frederick Douglass and John Brown, both of whom contributed articles and funds. Brown published his essay entitled “Sambo’s Mistakes” in Hodges’ paper, castigating northern Blacks for not doing more to end slavery. Because of such essays as Brown’s, the paper reached a peak circulation of 2,500. Hodges also argued in favor of re-settling free Blacks and escaped slaves on farms in up-state New York rather than in cities. After the paper ceased publication, Hodges continued to support abolitionist causes, including Brown. It is not known if Hodges was part of the Harpers Ferry planning, but when Brown was arrested in 1859, Hodges burned their correspondence. The editor may have helped the U.S. army as a scout in Virginia during the Civil War, but the evidence is uncertain. After the war, he was active in Virginia politics during the Reconstruction era and after the Democratic Party regained power in Virginia, he returned to New York in 1876, where he lived until his death in 1890.

In 1842 Myers began publishing the Elevator, a short-lived abolitionist sheet. Soon, he began working with the Northern Star Association, an abolitionist group, and founded its newspaper, the Northern Star and Freeman’s Advocate. This anti-slavery and reform newspaper was directed toward local free blacks and was published with the assistance of his wife, Harriet. The Northern Star office and the Myers home were used on occasion to provide comfort and support to fugitive slaves. As such Stephen and Harriet Myers helped hundreds of escaping slaves face the last leg of their northward journey to Canada. Because of their work, the Albany station developed the reputation for being the best organized section of the Underground Railroad in New York State.

By 1848 Myers had become the leading spokesperson in the Albany area for anti-slavery activism. He appeared at events and conferences in the region as a representative of the Albany Vigilance Committee, the leading local abolitionist group.