Black To The Future: Homeless & Pregnant In Middle School, She’s Now A Valedictorian 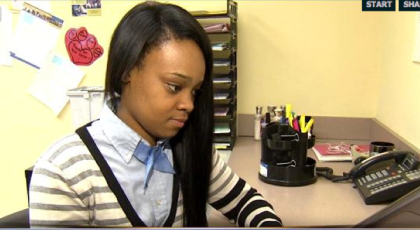 It’s a sad but all-too common story – a promising teenager’s life is derailed by a teen pregnancy. With the grim statistics on teen single mothers and how many of them are mired in poverty, it might be hard to see anything positive in the situation. But Chicago teenager Trameka Pope decided she was not going to be a tragic statistic. Now a high-school senior, Pope has been admitted to 26 colleges and his her high school’s valedictorian, receiving over $80,000 in scholarships. MyFoxChicago reports:  “I was told that God don’t make mistakes and he wouldn’t give anyone a child who wasn’t ready for one,” Pope said. In two weeks, she will graduate from Chicago’s Wendell Phillips High School in the Bronzeville neighborhood.

« Previous PostFlash Black Photo: 99 Bottles of Beer (on the wall) | 1940 Next Post »Poem: "Facing It" by Poet Yusef Komunyakaa