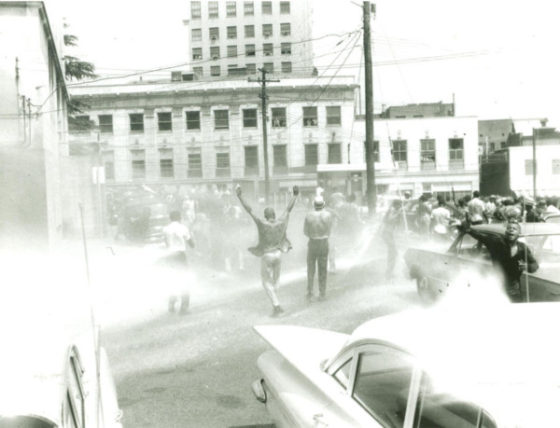 There were several events that led up to Bloody Monday on June 10, 1963, several civil-rights protests happened in Danville. Court documents point to demonstrations that occurred on May 31 and on at least six days in June and four days in July.

On June 5, 1963, 100 demonstrators marched, sang and chanted, staging sit-ins on sidewalks and in the offices of Danville Mayor Julian Stinson and City Manager T.E. Temple. Protestors, including Campbell, were arrested and their numbers had grown to 250 by that night. Court documents stated they threw bricks and bottles at buildings and police officers, but protestors have said the claims are not true.

On the night of June 10, 1963, about 50 civil rights marchers gathered outside Danville, Virginia’s jail to hold a prayer vigil for those who had been arrested during protests earlier in the during the day.

Deputized city workers, police officers and state troopers were carrying high-pressure fire hoses and nightsticks which injured about 47 black demonstrators, turning the event into a pivotal moment for Danville’s civil rights movement.
The incident was a culmination of frustration and protests resulting from institutional discrimination against blacks in Danville and across the South.

Sixty-five people were taken to the town’s African-American hospital as a result of the events of that day. Forty-seven of the victims were people attending the prayer vigil. The following day Martin Luther King Jr. visited Danville to support the demonstrators on July 11, 1963, but chose not to hold a march.

Judge Aiken began trying the arrested protesters on June 17. His handling of the cases of those arrested received criticism from several people and organizations such as the United States Department of Justice. During the trials Aiken refused to give out bills of particulars or grant continuances or bail. He also announced guilty verdicts from a pre-typed script and made it nearly, if not completely, impossible for the defendants to appeal their sentences.