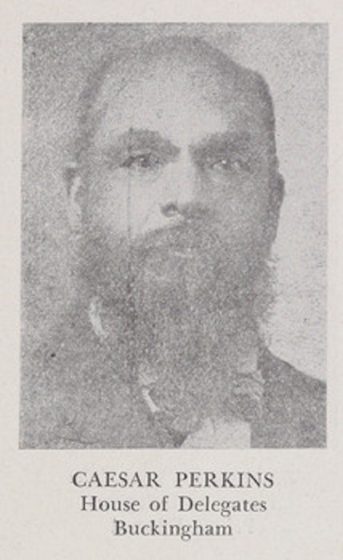 Caesar Perkins was an ordained Baptist minister and politician who served two separate terms in the House of Delegates eighteen years apart.

Perkins was born enslaved and became a prominent leader within Buckingham County’s African American community after the American Civil War (1860–1865).

Perkins’s political career began on July 6, 1869, when he and James H. Noble defeated Conservative Party candidates by about 225 votes out of the 2,600 cast for each of Buckingham County’s two seats in the House of Delegates. Outside of politics Perkins purchased 628 acres in 1870, and later operated a general store and two ordinaries. He became an ordained Baptist minister by 1877.

Perkins remained involved with public affairs, following most African American politicians into the short-lived Readjuster Party and then into the Republican Party. He won his second term in 1887, representing Brunswick and Caroline counties.

By 1891, Perkins had moved to Clifton Forge, where he acquired property and operated a brickyard for the nearby Iron Gate Land and Improvement Company. He suffered financial difficulties and his property was sold at public auction in 1896. While living in Clifton Forge, Perkins helped establish Second Baptist Church (later Main Street Baptist Church), of which he was pastor, and facilitated the transfer of property to the church in 1897. Caesar Perkins died in Richmond and was buried in Buckingham County.