Camp Stanton played a pivotal role in recruiting and training Black men in Maryland to serve in the Union Army. Camp Stanton was located in the heart of Maryland’s slave-holding region. Named for Secretary of War Edwin Stanton, the camp was established in August 1863. Although black soldiers had served in the nation’s armed forces since the Revolutionary War, they were barred from the U.S. Army during the Civil War until President Abraham Lincoln issued the Emancipation Proclamation on January 1, 1863.

Free blacks as well as former slaves formed the 7th, 9th, 19th, and 30th Colored Infantries as part of the United States Colored Troops (USCT). In addition to free blacks, the former owners of manumitted slaves were eligible to receive $300 in compensation if these slaveholders were loyal to the Union. The Bureau of Colored Troops could recruit without the master’s consent if the county quota had not been met after 30 days. This led to a mass influx of freedom seekers joining the Union Army and obtaining their freedom.

Most often recruit were taken when found and usually with just the clothes on their back. No time was given to the Black men to say goodbyes or settle affairs. If a person was working in the fields at the time of their recruitment, they would march away from the fields leaving work undone and field tools unattended.

Enlistment and service was dangerous, however, it offered a chance for former slaves to not only gain their freedom, but to gain a rudimentary education and to earn and save money to buy property. Of the four regiments, the Seventh suffered the highest number killed in action (85), and two white officers with the Thirtieth would be recipients of the Medal of Honor. 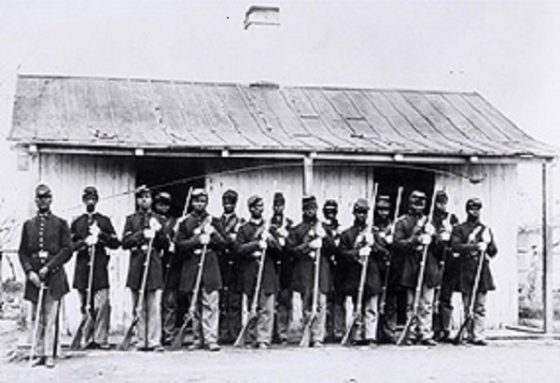 Camp Stanton
« Previous PostListen To This Snippet Of " The Rights & Progress Of The Negro" by William Taft. What Are Your Thoughts? Next Post »Cesar: Expert Practitioner of Traditional African Medicine in the South