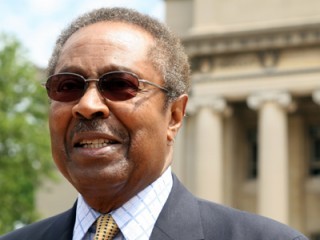 Clarence Jones is best known for his close relationship with Dr. Martin Luther King Jr. He served as Dr. King’s  personal counsel, advisor, and draft speechwriter. Beyond those duties, he is a renowned scholar and author of What Would Martin Say? and “Behind the Dream: The Making of the Speech that Transformed a Nation.

Clarence Benjamin Jones was born January 8, 1931, to parents who were domestic workers in Philadelphia, Pennsylvania, and was raised in a foster home and a boarding school in New England. He graduated from Palmyra High School in Palmyra, NJ.

Jones later attended Columbia where he received his Bachelor of Arts degree in 1956. He later enrolled at Boston University School of Law, where he obtained his degree in 1959.  At the age of 36, Jones joined the investment banking and brokerage firm of Carter, Berlind & Weill where he worked alongside future Citigroup Chairman and CEO, Sanford I. Weill and Securities and Exchange Commission Chairman, Arthur Levitt. Jones was the first black person to be named an allied member of the New York Stock Exchange.

Jones joined the team of lawyers defending King in the midst of King’s 1960 tax fraud trial; the case was resolved in King’s favor in May 1960. Jones and his family later moved to New York to be close to the Harlem office of the Southern Christian Leadership Conference (SCLC), and he joined the firm of Lubell, Lubell, and Jones as a partner. In 1962, Jones became general counsel for the Gandhi Society for Human Rights, SCLC’s fundraising arm.

Following King’s 12 April arrest in Birmingham for violating a related injunction against demonstrations, Jones secretly took from jail King’s hand-written response to eight Birmingham clergymen who had denounced the protests in the newspaper. It was typed and circulated among the Birmingham clergy and later printed and distributed nationally as “Letter from Birmingham Jail.”

Jones continued to work as Dr. King’s lawyer and advisor until King’s death. He assisted him in drafting the first portion of the 1963 “I Have a Dream” speech,  and saw that King’s copyright of the momentous address was preserved.