Dahomey Amazons: All-Female Military Warriors of the Kingdom of Dahomey

The #Dahomey Amazons or Mino (meaning “Our Mothers” in the Fon language) were a Fon all-female military regiment of the Kingdom of Dahomey in the present-day Republic of Benin. The Fon women’s army had three main wings: the right and left wings, and the elite center wing or Fanti.  Each of these wings had five subgroups: the artillery women, the elephant huntresses, the musket-bearing frontline group, the razor women, and the archers.  They lasted until the end of the 19th century. The group of women received their name because they resembled semi-mythical Amazons of ancient Anatolia and the #Black Sea.

The Dahomey Amazons are the only documented all-female official front-line combat arms military unit in the world history. Tough, violent blood-and-guts women single-mindedly devoted to hardening themselves into ruthless instruments of battlefield destruction, these machete-wielding, musket-slinging lady terminators were rightly-feared throughout Western Africa for over 250 years, not only for their fanatical devotion to battle, but for their  refusal to back down or retreat from any fight unless expressly ordered to do so by their king. The women soldiers were trained, given uniforms, and equipped with Danish weapons which were obtained through the slave trade. By the mid-19th century, they were close to 6,000 in number. 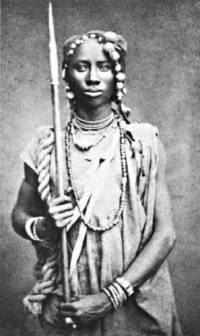 It is said that King Houegbadja (who ruled from 1645 to 1685) the third King of Dahomey, started the group the Amazons as a corps of elephant hunters called the gbeto. Houegbadja’s son King Agaja (ruled from 1708 to 1732) established a female bodyguard armed with muskets. European merchants recorded their presence. According to tradition, Agaja developed the bodyguard into a militia and successfully used them in Dahomey’s defeat of the neighboring kingdom of Savi in 1727.

The last major use of Amazons came in the Franco-Dahomean Wars of 1890 and 1892.  The French conquered Dahomey in 1892 and were particularly ruthless toward the Amazons, executing many of them partly because they noted that Amazons provided the last resistance to their conquest of the state.