Did You Know the First Negro League World Series was Played in 1924?

There was not a Colored World Series scheduled in 1923, due to the unresolved conflicts between league presidents Rube Foster and Ed Bolden, but there was considerable pressure from the black media and from fans to hold a championship. The 1924 Colored World Series was a best-of-nine match-up between the Negro National League champion Kansas City Monarchs and the Eastern Colored League champion Hilldale. In a ten-game series, the Monarchs narrowly defeated Hilldale 5 games to 4, with one tie game. It was the first World Series between the respective champions of the NNL and ECL.

The Negro Leagues World Series was not to be measured in immediate monetary terms but in what the series might mean for the future of the black game. That would remain to be seen as the decade that has been dubbed Black Baseball’s Golden Age played itself out across the remaining years of the 1920s. The World Series payoff for players was less than what many had expected–$4,927.32 to be split among the winners; $3,284.88 to the losers. 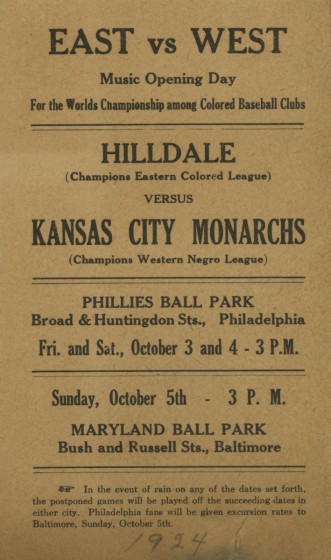