The Nguni are a group of Bantu people living in Southern Africa. Included are groups such as the Zulu, Swazi, and Ndebele making up the Southern Nguni and the Northern Nguni groups of Bomvana, Mpondo, Thembu, and Xhosa.

The martial art that came from the Nguni people is a form of stick fighting often considered to be violent but a part of the history and culture. Depending on the scholar or griot you ask, the style originated during Shaka Zulu’s time which would date it to the late 17th-early 18th centuries or Gumede’s son Amalandela, dating it to the mid 17th century.

The main purpose at the time was as training for war and self-defense. Over time it became a sport is towns and villages. As fencing style, it is in the same family tree as kendo and Olympic-style fencing.

Known as dlala ‘nduku, Nguni stick fighting is an event practiced mainly by herders and features either a weapon-shield form or the traditional dual weapon form. Northern stick fighting uses two sticks—isiquili/induku and uboko or the attacking and defending sticks. The southern style uses an isiquili and an izolihawu or knuckle shield for defense.

Among the Zulu people, when boys came of fighting age at 16 they would go into the forest with their father and cut down his own stick. Over the years he would likely have a number of fighting sticks.

The induku or isiquili is a shorter, durable stick that handles attacks. The length of the stick is down to that of the wielder but is close to 34-35 inches in most cases. Similar to a bat or other wielded weapons, the shaft or handle to wrapped as a grip. The wrap is also meant to hide the sharpened end of the stick since stabbing is considered dishonorable.

The uboko is a longer stick is a longer stick with a sharp end used for body defense. It can run the height of the fighter for this reason. Also as defense is the izolihawu a small knuckle shield to protect the defending hand.

There are specific techniques but style is based more on tactics, stance, and speed as fights tend to be faster paced and more organic than other forms of fencing. Practitioners start at a very young age watching older boys fight for positions as herders before they come of age and fight as well.

As far as rules, blows to the head are prohibited and real fighting sticks are used in competitions. Referees or officials for bouts are either the igoso (head of young men) or the war captains, umphathi wezinsizwa. Before competitions, sticks and the fighters themselves are prepared for combat with the help of traditional medicine.

In the fight itself, victory comes via forcing an opponent to quit—mainly by overwhelming them with rapid, heavy blows or well placed blows. It is often customary to tap shields or sticks as a sign of respect or sportsmanship before bouts. Scars as a result of Nguni stick fighting are viewed as badges of honor—especially ones on the head.

As ceremony, Nguni stick fighting is a spectacle at umemulo or women’s coming out ceremonies. Often single young men or amasoka will compete to win the appeal of women. 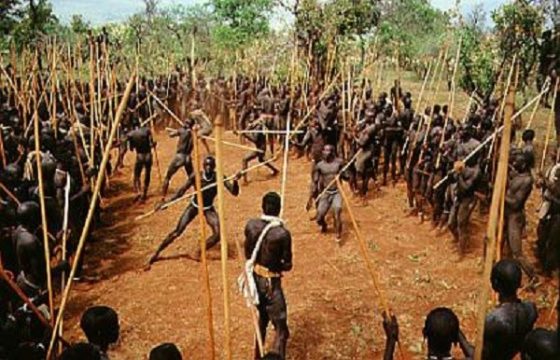