“Racism, in the first place, is a weapon used by the wealthy to increase the profits they bring in by paying Black workers less for their work.”

Angela Yvonne Davis was born January 26, 1944, in Birmingham, Alabama. She spent her childhood years in the turbulent “Dynamite Hill” area, which, true to its nickname, was marred by white supremacist terrorist attacks on black residents. She grew up surrounded by revolutionary activists, as her mother worked with a civil rights organization that was heavily influenced by the Communist Party of the United States.

Davis received a full scholarship to Brandeis University after attending an integrated high school in New York City’s Greenwich Village. She met and studied with philosopher and radical Herbert Marcuse, and eventually made her way to West Germany, where she began study at the University of Frankfurt. Davis visited East Germany and was amazed by how well the Easterners dealt with the residual legacy of Fascism. Whereas the Westerners allowed former Nazis to take high positions within the government, the East Germans actively fought against and combated the legacy of Nazism and Hitler.

Davis was pulled back to the United States by the sharpening of the struggle for black liberation. In 1969, she began her teaching career at the University of California at Los Angeles. Davis became an associate of the Black Panther Party, and was also an active member of the Communist Party. That same year, she was fired by the Board of Regents for her revolutionary liberation views, which provoked outrage from her fellow professors and other liberation activists. She was eventually reinstated, as it’s illegal to fire people for their political views, only to be fired again on June 20, 1970, over supposed “inflammatory” rhetoric.

This didn’t distract or deter her from continuing her role in the fight for liberation. She was an adamant supporter of three black inmates, known as the Soledad Brothers, who were accused of killing a correctional officer. On August 7, 1970, Jonathan Jackson, the youngest brother of the charismatic Soledad Brothers, gained control over a courtroom in Marin County, California by arming the black defendants and taking Judge Harold Haley, the prosecutor, and three female jurors as hostages. As Jackson attempted to transport the hostages and two convicts away from the courtroom, police began shooting at the vehicle, which led to the death of the judge and three black men.

The weapons that were used in the incident were purchased by Davis a few days earlier. She was eventually charged with aggravated kidnapping and first-degree murder, despite the murders being perpetrated by the police, with a warrant being issued August 14, 1970. 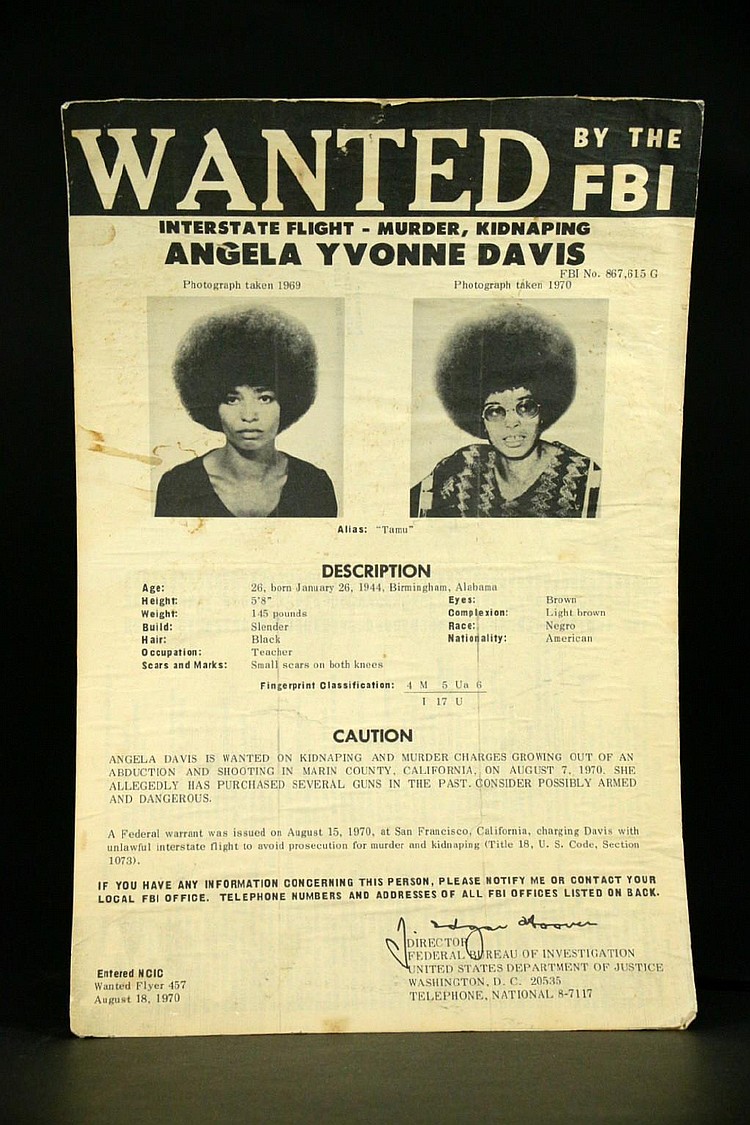 Davis was forced to flee the state of California as a political fugitive to evade massive police attempts to arrest and railroad her. She was arrested in New York City a few months later by the FBI. As a result, thousands of people around the country and world, including in the Soviet Union, East Germany, South Africa, North Vietnam, and the People’s Republic of China, organized a massive campaign for her release. Throughout the world, supporters of the “Free Angela” movement raised money, sent flowers and notes of encouragement, and performed many other critical pieces of moral and financial support. In 1972, as a result of this effort, Davis was freed from county jail on $100,000 bail, and subsequently found not guilty by an all-white jury.

After being acquitted and freed from legal machinations and railroading attempts by the U.S. and California governments, Davis went to Cuba, where she was received with warm welcome and solidarity by the masses of Afro-Cuban people. In 1979, Davis was awarded the Lenin Peace Prize, an honor shared with other such freedom fighters as W.E.B. DuBois, Sukarno, and Ahmed Sékou Touré. She continues to be a relentless and tireless fighter for the liberation of all human beings from all yokes of exploitation and oppression perpetrated by the global system of capitalist-imperialism.