Early History of Haiti: The First Independent Black Country In The World

Haiti, a country situated on the Hispaniola Island in the Caribbean archipelago, is very rich in history, as it was home to the first successful slave revolt in and, subsequently, the first Black country to win its independence. The country shares the Caribbean archipelago (Island) with the Dominican Republic. The Caribbean region was inhabited by the indigenous Taino- Arawakan people and the Carib Indians. The limited historical records reveal a successive wave of Arawak immigrants moved from Orinoco Delta of South America towards the north, settling in the Caribbean Islands. Around the 600 AD, Arawak and Taino Indian cultures arrived in the islands, forcing out the original inhabitants. Afterward, the tumultuous history of Haiti followed, with it being the first Independent Black country, poverty, natural disasters, political instability, and racial discord soon followed.

Haitian history was mainly oral until the arrival of a European navigator from Spain- Christopher Columbus on 4th December 1492 to the vast islands of the Atlantic Ocean, which was later named at the Caribbean. The arrival of Mr. Columbus to the Caribbean regions automatically established the early Spanish domination of the region, hence the beginning of its colonization. Five decades after the arrival of Columbus, the pernicious influences of colonization were evident, including diseases outbreaks, accompanied by the brutal labor practices, which gradually wiped out most of the Native population. 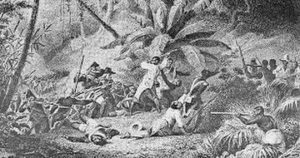 The Spanish occupation of Haiti went from 1492 to 1625, accompanied by slavery enterprises. Towards the late 17th century, the French were already competing with their Spanish counterparts for settlement and cultivation on the island. The French focused more on the agricultural activities, and soon enough, their adventurers began settling in the colony. This turned the French portion of the islands into sugar and coffee production areas. By the late 1780s, approximately 40% of sugar imported into France and the Great Britain, and 60% of the world’s distributed coffee were from this small Caribbean colony. The widespread slavery on the agricultural areas and brutality exhibited by the foreign powers on the original residents made the indigenous population dwindle. Slaves from Africa provided labor, which was very critical to the economic developments of Saint-Domingue (the French-dominated areas). Approximately 800,000 slaves arrived at the Caribbean Islands from Africa.

The rising rebellions and revolutions frustrated the Spanish settlers who gave up and set off from the Caribbean islands, leaving behind the French settlers. The growing slave populations added to the overall Caribbean population, leading to the increased racial diversity. The white population constituted the top class in the social structure. They owned shops, plantations, and several other frontiers of wealth. The middle class majorly constituted the indigenous people, while the lower class constituted the freed slaves. From 1625 to 1789, the French had completely taken over, setting up their colony to be strong and impactful. Mistreatments and brutality posed great threats to the plantations as the slaves escaped and abandoned the farms, followed by mass revolts. The freed blacks were already fighting for their social and civil rights, property rights, and the right to full citizenship. By the early 1790s, there was the dissolution of the Bourbon Dynasty through French Revolutions, followed by the Napoleonic wars. The widespread breakdown of the social and civil order prompted further revolutions, calling for the British and Spanish military interventions. By 1794, the French had no other choice but to abolish the slavery, and later in 1804, Haitians fought and won their independence, forever gaining the title as the first Black country in the world to do so.

Some questions to ask yourself are: Why is the history we are taught in school so skewed to frame Haiti as nothing more than its current socio-economic struggle, rather than the island of the first successful slave revolt and first independent Black country? Why does history aim to have Haiti’s rich and historic past completely overshadowed by its current unrest? Comment below.

Mackenzie, Charles. Notes on Haïti, made during a residence in that Republic, Vol. 1, London, Henry Colburn and Richard Bentley, 1830.

« Previous PostWilliam "Willie the Pro" Thrower First African American Quarterback in the NFL Next Post »15 Years Before The Dred Scott Decision, This Fugitive Slave's Emancipation Became A Benchmark In "The Struggle For Freedom"