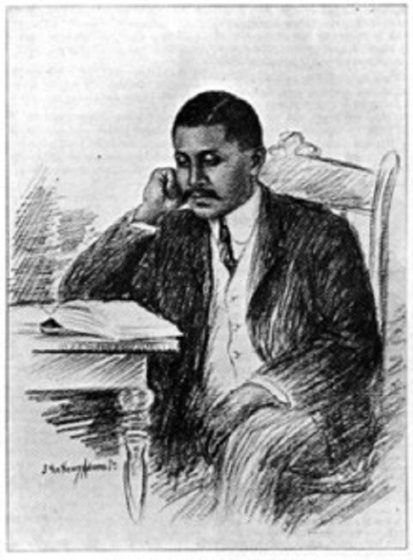 No photo of Edward A. Johnson available

Edward Austin Johnson was an educator, historian, attorney, and politician. He was one of eleven children of Columbus and Eliza Johnson, slaves belonging to a large slaveholder in Wake County, North Carolina.

Johnson acquired his earliest education from a free black, Nancy Walton, and after emancipation attended a school in Raleigh, NC directed by two white teachers from New England. The teachers introduced him to the Congregational church, in which he was active for the rest of his life.

In 1879, Johnson enrolled at Atlanta University and upon graduation four years later became principal of the Mitchell Street School in Atlanta. In 1885, he returned to Raleigh to head Washington School, a position he held until 1891. As a principal and teacher, he came to recognize the critical need for works that would provide black children with information about “the many brave deeds and noble characters of their own race.” To fill the void, Johnson wrote A School History of the Negro Race in America which was published in 1891 and later appeared in several revised editions. This textbook was the first by a black author to be approved by the North Carolina State Board of Education for use in the public schools, and it established his reputation as a scholar and historian. Johnson also authored several other books.

While a principal in Raleigh, Johnson enrolled in the law school at Shaw University and received a bachelor of law degree in 1891. Two years later he joined the law faculty at Shaw where he remained until 1907, serving first as professor and later as dean. Johnson acquired an enviable reputation as a trial lawyer and won all of the numerous cases that he argued before the North Carolina Supreme Court.

Johnson also was associated with various business ventures. In 1897, he joined Warren C. Coleman and other black businessmen in North Carolina to establish a cotton mill in Concord. Johnson served first as vice-president and later as president of the Coleman Manufacturing Company, which was intended to become a model of Negro initiative and business acumen.   In 1898, Johnson and six other black men organized the North Carolina Mutual and Provident Association in Durham which in time became the largest Negro insurance company in the world.

Throughout his career Johnson was active in the Republican party. He figured prominently in the party’s local and state organizations and was a delegate to the Republican National Convention in 1892 and 1896. He was a member of Raleigh’s Board of Aldermen for a term, and he served from 1899 to 1907 as assistant to the federal attorney for the district of eastern North Carolina.

Edward A. Johnson
« Previous PostDigital Underground Frontman Shock G (aka Humpty Hump) Dead at 57 Next Post »How Dr. Percy Julian Became One Of The Most Influential Chemist In American History