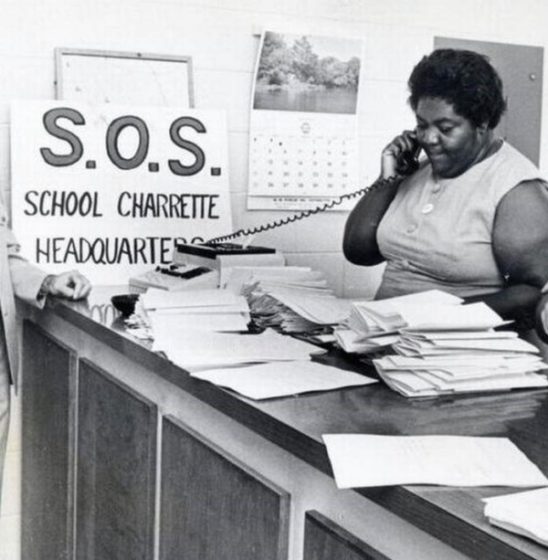 Ann George Atwater was a lifelong grassroots civil rights activist in Durham, North Carolina. Throughout her career she helped improve the quality of life in Durham through programs like Operation Breakthrough (Durham, North Carolina), a community organization dedicated to fight the War on Poverty. Her loud, demanding, and assertive personality enabled her to be an effective activist and leader when advocating for black rights, such as better private housing. Atwater promoted unity of the working-class African Americans through grassroots organizations.

Atwater was born in Hallsboro, Columbus County on July 1, 1935. As a child, she attended the Farmers’ Union School in nearby Whiteville. Her parents, Mr. and Mrs. William Randolph George, both died by the time she was nineteen. At the age of fourteen, she married French Wilson, and soon moved with him and their growing family to Durham, North Carolina in 1953. Her then-husband worked for Venable Tobacco Company and Atwater as a domestic worker.

Atwater worked for politician and lawyer Henry McKinley “Mickey” Michaux Jr., the first African American Representative from Durham County, and they became life-long associates. Not long after arriving in Durham, her husband left Durham for Richmond, with Atwater raising their children alone.

In the mid-1960s, Atwater started her involvement with Operation Breakthrough, an organization addressing poverty and inequality and founded in Durham in 1964. Operation Breakthrough was funded through the North Carolina Fund. Program director Howard Fuller, later head of Malcolm X Liberation University, specifically asked for Atwater to join. Her involvement grew as Social Worker Associate and Atwater was appointed to its Board of Directors. The activities she led and organized included sit-ins, pickets, and boycotts.

By 1967, Atwater was also employed by the United Organization for Community Improvement, also a part of the North Carolina Fund, as supervisor of its committee of Neighborhood Workers, plus served as chairman of its Housing Committee. The organization worked to help communities in Durham address food scarcity, voting rights, education, and housing.

She was also elected as local Democratic Party vice president in 1968 and later served with the Durham Committee on the Affairs of Black People. In addition to being active in the civil rights movement through the decades, Atwater was also a lifelong member of the Mount Calvary United Church of Christ, becoming the first female deacon, plus a member of Church Women United and the National Council of Negro Women. Atwater died June 20, 2016.