Morrison was born in New Orleans in 1912 and began his film career almost immediately afterwards. He was first used in a film because the original child actor would constantly cry. A crew member asked Morrison’s father to bring his infant son, and since the baby gave the crew everything they needed, he was given the nickname “Sunshine.”

As a child, he appeared in Baby Marie Osbourne silent film features. By the time he was four years old, “The Sunshine Sammy Series” was a feature was created for him. Morrison later appeared in 28 episodes of the Little Rascals between 1922 and 1924.

After extensive traveling and touring in Australia with his partner Sleepy Williams, Morrison returned to the United States and was chosen by Sam Katzman to be one of the East Side Kids. Morrison could relate to the role from the beginning, due to his personal experiences growing up on the East Side of New York. Morrison played the only black member of the gang, “Scruno,” and had as many lines as the other members of the cast.

Morrison wanted to pursue other opportunities in show businesses, so after working with the gang for three years, he decided to part ways. Morrison went on to appear in shows such as “Good Times” and “The Jeffersons.” He also appeared in 145 motion pictures and was inducted into the Black Filmmakers Hall of Fame in 1987. Morrison died Lynwood, California on July 24, 1989. 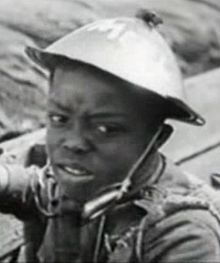