Eva Jessye: The Grand Dame of Black Music in America

Eva Jessye devoted her life to the arts. She made extraordinary contributions as an actress, singer, choral director, poet, and author, and has often been referred to as the “Grand Dame” of black music in America. Jessye was acknowledged as the first black woman to win international distinction as a director of a professional choral group.

Jessye was born in Coffeyville, Kansas, in 1895. She started her academic career in the public schools and later attended Western University in Quindaro (presently Kansas City, Kansas) and Langston University.

After college, Jessye taught in the classrooms of several segregated schools in Oklahoma. She moved to New York in 1922 and found work for a black newspaper. However, nothing moved or motivated Jessye quite like the sound of music. 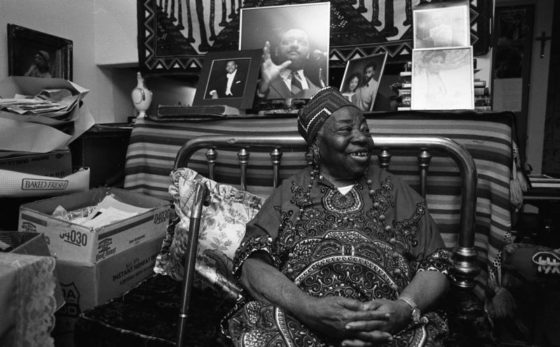 She continued to direct small choirs and would often organize small singing groups to perform at different events. While jazz offered one voice for African Americans, Jessye used another form to express her cultural heritage. The tradition of spirituals is believed to have arisen as a distinctly African American response to the specific needs and goals of the culture. Jessye saw the opportunity to preserve this music by arranging and recording them in concert tradition.

Jessye published a collection of traditional songs in the 1920s, My Spirituals. During the 1930s, Jessye became the chorus trainer for George Gershwin’s Porgy and Bess, the first true American opera. Jessye walked with Dr. Martin Luther King, Jr. in 1963 during his civil rights march; her group was the official choir for the event. She also appeared in several films, including Black Like Me (1964)and Slaves (1969).

After her choir disbanded in the early 1970s, Jessye returned to writing, teaching, and composing at universities. The University of Michigan’s Department of African-American Studies awarded Jessye with a Doctor of Determination Certificate. Kansas governor Robert Bennett declared October 1, 1978, as Eva Jessye Day, and in 1982, she was named the Kansas Ambassador for the Arts by Governor John Carlin. Jessye died in 1992.