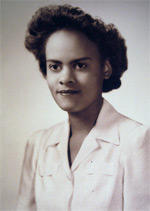 Evelyn Boyd Granville was the second black woman to earn a Ph.D. in mathematics. She was a longtime professor and worked on important NASA space computer software programs.

Granville was born on May 1, 1924, in Washington, D.C., to William and Julia Boyd. Her father held a variety of jobs, including custodian, chauffeur, and messenger for the FBI; her mother, Julia, became a currency inspector for the U.S. Bureau of Engraving and Printing.

After graduation, Granville determined she had a passion for teaching. She became an associate professor of mathematics at Fisk University in Nashville, Tennessee. In 1952, Granville decided to give up teaching to become a mathematician for the National Bureau of Standards in Washington, D.C. She later took a job with the International Business Machines Corporation (IBM); she created computer software that analyzed satellite orbits for the Project Vanguard and Project Mercury space programs.

Granville moved to Los Angeles in 1960 to perform research on computing orbits for the Computation and Data Reduction Center of Space Technology. In 1962, Granville accepted work on the Apollo Project at North American Aviation.

In 1967, Granville made the decision to return to the classroom, teaching computer programming and numerical analysis at California State University, Los Angeles. During this time, she co-authored her first college textbook and participated in the Miller Mathematics Improvement Program, a supplemental math program for select California elementary schools.

Granville retired from teaching and moved from Los Angeles to Texas in 1984, but her retirement didn’t last long. She returned back to the classroom to teach eighth-grade students basic computer skills. In 1989, she was awarded an honorary doctorate by her alma mater, Smith College, the first honorary doctorate given to an African-American female mathematician by an American institution. She finally retired in 1997.