Have you ever heard reference to the term “The Real McCoy?” This term obtained its reputation from the innovation of Elijah McCoy, born in Colchester, Ontario, Canada in 1844.

McCoy was one of 12 children born to George and Mildred McCoy. The elder McCoys were African fugitive slaves who escaped the state of Kentucky and fled to Canada through the Underground Railroad.

George McCoy joined the Canadian Army and fought in the Rebel War. He raised his family as free Canadian citizens on a 160-acre homestead. The McCoys recognized early that Elijah McCoy exhibited talent with mechanical items, often taking them apart only to put them back together again. While in his teens, McCoy’s parents sent the young man to be educated in Edinburgh, Scotland, where he would study mechanical engineering.

When Elijah McCoy returned from Scotland, he settled in Ypsilanti, Michigan. He was not able to find work as an engineer and soon accepted a job as a locomotive fireman with the Michigan Central Railroad. In this position, McCoy was manually required to shovel coal into a train’s engine and to apply oil to the moving parts of the machine. 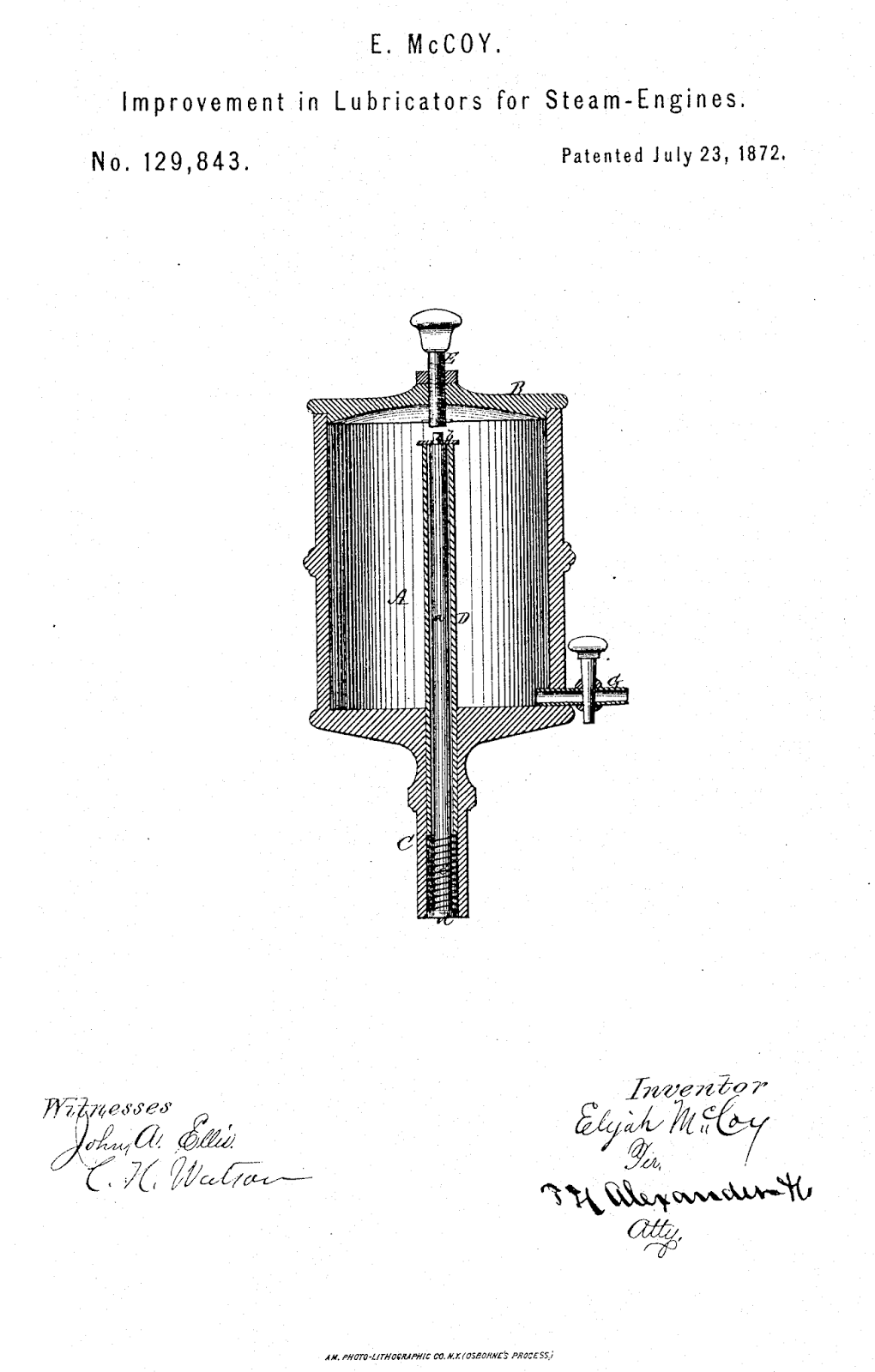 By 1872, Elijah McCoy had developed his own engineering workshop through which he would invent a mechanized container, or cup, with a stop-cock that regulated the flow of oil onto the moving parts of a machine. This was the first automatic lubricator, which revolutionized the industry.

Up until McCoy developed the automatic lubricator, the biggest industrial problem, according to historian McKinley Burt, was the down time required of most production machinery of the time. Machinery was halted so that hand lubrication of mechanical parts could occur, something McCoy was all too familiar with as a locomotive fireman. According to Burt, economists estimated that during the post-Civil War period, this issue resulted in a loss of approximately 20 percent of the Gross National Product.

On July 23, 1872, McCoy obtained United States patent No. 129,843 for the first automatic lubricator. From 1872 to 1920, McCoy would patent dozens of lubricating units and mechanical devices that boosted the efficiency of industry. Today, millions of machines are using some version of McCoy’s automatic lubrication device.

Whether it was a matter of Naval vessels, oil-drilling rigs, trains or mining, mill or construction equipment, no one would even consider a purchase unless inspection revealed that it was equipped with “The Real McCoy,” and not a copycat design. An African American inventor’s name became the term for excellence in the industrial sector.

Elijah McCoyThe Real McCoy
« Previous PostEvelyn Boyd Granville: Second Black Woman to Earn a Ph.D. in Mathematics Next Post »Julia Scott Reed: One of the First Blacks of a Major Daily Newspaper in the South