One of the most memorable and devastating riots in the American history is the April-May 1992 riots in Los Angeles, California. The riots ensued through nearly a year later in reaction to when four LAPD (Los Angeles Police Department) officers involved in the beating of an African-American motorist, Rodney King, on March 3, 1991. Many authored sources have addressed these riots by referring them with different names, such as Rodney King riots, the 1992 Los Angeles Civil Unrest, the 1992 Los Angeles Civil Disturbance, the Los Angeles Uprising, and the South Central Riots. 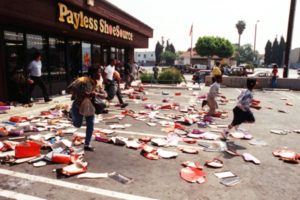 These riots involved a series of arsons, lootings, violence, and physical civil unrest. The riots began from South-Central Los Angeles on 29th of April 1992, upon the court clearance of the four police officers from the LAPD, who were involved in the videotape that displayed the use of excessive force in the arrest and beating of the African-American, Rodney King. Within six days, the civil unrest, riots, and violence involving the destruction of valuable properties had spread to all other regions of the Los Angeles metropolitan area following the announcement of the “Not Guilty” verdict by the court. This article, thereby, summarizes some quick facts about the 1992 riots.

The controversial videotape was captured by George Holliday from his balcony, displaying the vicious beating as the four officers strike Mr. King over 50 times using police batons. More than 20 police officers were at the scene, most of them being from the LAPD. Mr. Rodney suffered a lot of injuries, including about 11 fractures, from the merciless beatings. On 7th of March 1991, King was set free without any charges. Subsequently, on 15th of March, Officers Timothy Wind, Michael Powell, Briseno Theodore, and Sergeant Koon Stacey were indicted by the Los Angeles jury following the King’s beating. Nevertheless, the jury did not indict the other 17 officers who stood and watched Mr. King be ruthlessly beaten. On 29th of April, the four police officers were acquitted, and that is when the riots began in the South Central Los Angeles. Governor Wilson declared a state-of-emergency on the same day and ordered for the National Guard troops to come and restore normalcy. 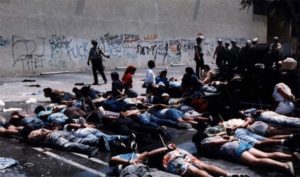 The riots continued as the citizens became involved in gruesome battles with the security officers who were dispatched. These battles were accompanied by lootings, arsons, assaults, violence, destruction of property, and killings. Over 50 people lost their lives, more than 2,000 were injured, and more than $1 billion properties were destroyed. The local police could no longer restore the situation; hence, the Marine Division and California Army National Guard were called upon to restore peace. More than 600 Army troops, 9,800 National Guard troops, and 1,100 Marines patrolled the streets and regions of Los Angeles by May 3rd. Upon the restoration of peace, the indictments against officers Powell, Briseno, Wind, and Koon were later returned on 4th August. They were charged with violation of Rodney’s civil rights.

In short, here are the Fast Facts you need to remember about the Los Angeles riots:

Official Negligence: How Rodney King and the Riots Changed Los Angeles and the LAPD pages 41–42.

« Previous PostFirst Legal Case of NAACP: Pink Franklin Trial Next Post »Flora Batson, Dubbed as the "Queen of Song" of the 19th Century