George Albert Flippin was born February 8, 1868, in Ohio to Charles and Mahala Flippin. His father, a freed slave who fought in the Civil War on behalf of the Union, ultimately became a physician after attending the Bennett Eclectic Medical School in Chicago. His mother died when he was very young, but his father later married a white physician who was an alumna of Bennett Eclectic Medical School as well. Flippin graduated from high school in Henderson in 1891, and later enrolled at the University of Nebraska from 1891 to 1894.

Flippin, the first African-American football player for the University, became its star player. Although Flippin was a great player, he was still exposed to racism. In 1893, he was voted captain by his fellow players, but the newly hired coach, Frank Crawford,  refused to offer him the position. He was quoted as saying, “It takes a man with brains to be a captain; all there is to Flippin is brute force.” Despite Crawford’s opinion, Flippin became president of the Palladian Literary Society, sergeant-at-arms of the 105-member University Debating Club, and a charter member of the University Medical Society in Lincoln. 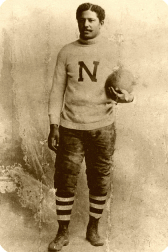 In 1898, Flippin started medical training at the College of Physicians and Surgeons in Chicago. He graduated in 1900 and worked in Chicago and Pine Bluff, Arkansas, before setting with his wife, Georgia Smith, in Stromsburg, Nebraska, in 1907. In Stromsburg, his father and step-mother had established a medical practice.

Flippin built the first hospital in Stromsburg, which is now a local Bed and Breakfast.  He was a well-respected doctor and surgeon who was known throughout the state for making house calls. Whether a person could pay or not, Flippin always tended to the ill.

Although he was a physician, his status as an educated professional did not protect him from discrimination. Flippin was part of an early civil rights case in Nebraska, in which he was denied service at a restaurant.

George Flippin died May 15, 1929. In 1974, he was inducted posthumously into the University of Nebraska Football Hall of Fame.